BIG CAT NEWS: And the beat goes on (for 'beat' substitute 'The Beast of Copthorne') 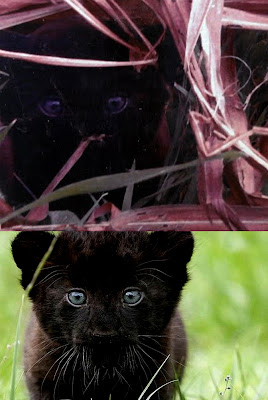 Karl Shuker writes re the latest episode of the Beast of Smallthorne saga:

Check out the photo of a black panther cub at the following link: http://ultimate-wallpaper.com/wallpaper/black-panther-cub-1nngm6/This photo has been used as the basis of the Smallthorne cub photo, by having been darkened, and tilted very slightly to the left. Also the outline of the cub's head has been changed, and leaves etc overlain, but if you check the eyes of that cub and those of the Smallthorne cub, you will see that except for having been darkened a little they are identical in every smallest detail, as is the upper edge of the nose and the distance between eyes and nose.

To show you what I mean, I've mocked up a rough comparison (darkening the panther cub photo but without the tilt and outline changes), which I'm attaching here.

All the best, Karl

Admittedly I thought it was a moggy rather than a panther...
Posted by Jon Downes at 9:41 PM