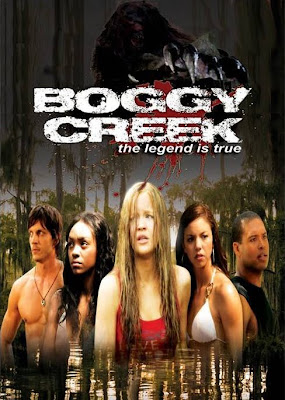 I’ve often been of the opinion that any film that ranges from being half-decent to a classic should never…ever, be remade. I don’t think I’ve ever seen a good remake, and personally don’t think they’re necessary. So, when I heard that my all time favourite movie, The Legend Of Boggy Creek, was to be loosely remade, my heart sank with despair. The original movie – directed by Charles B’ Pierce in the 1970s – changed my life. It terrified me as a kid, and in its eerie suggestion allowed the mind to fill in the blanks. More importantly, the film really put the Bigfoot legend on the map, especially as it played like a docu-drama – presenting the creature as a half-hinted presence amidst the accounts told by actual witnesses. If I’d never seen The Legend Of Boggy Creek as a child, I would never have become a writer let alone a monster-hunter.

Now, let’s fast forward to 2011, and some guy named Brian T. Jaynes has somehow put together his pocket money to ‘make’ Boggy Creek, featuring a cast of all stars including the delightfully named Texas Battle, alongside Stephanie Honore, Melissa Carnell, Damon Lipari and Shavon Kirksey. Sadly, by the time the opening credits are on the screen, we find ourselves, like in so many, usually American remakes, that we don’t actually care who’s in the movie…or if they die. I’m guessing that the alternative title, Attractive Young Woman In Tight Shorts Who Likes Running (But Has Parental Issues) And Goes Camping With An Assortment Of Scantily Clad Females Who In Turn Introduce Us To A Myriad Of Goofball Hunks…Oh, And A Marauding Bigfoot, just didn’t have the same ring to it. Within seconds of watching this movie I almost choked on my Bigfoot burger…how on earth can people be allowed to make films as bad in this day and age ? It’s an insult to the intelligence of even primitive man and anyone who finds something good in this movie deserves the same punishment as those pea-brained actors… disembowelment by Mr Sasquatch.

It’s not a huge surprise that this movie went straight to dvd, but the fact it was able to incorporate the Boggy Creek name into its title is a disgrace. So, “what’s it about ?” I hear you ask ? Well, I think my alternative title pretty much sums up this shambolic film. Mutilated victims are turning up in the backwoods of Boggy Creek (although we only see a few – mainly at night of course!), but who cares when we’ve suddenly got three airhead femme fatale’s in hot pants! It’s your typical US flick, the type that has been bombarding our television, and somehow cinema screens since the ‘90s – taking the halcyon days of the ‘70s and ‘80s slasher flick to vomit-induced levels of trash. There are the three rather attractive girls, who have the combined IQ of Bigfoot excrement, completely bereft of character, except the blonde who likes jogging – and then we meet the hunk in the woods who has Bigfoot issues (apparently his wife was dragged off into the woods by a horny Bigfoot “many years ago”) as well as the two other ‘dudes’ aka, planks of wood, who eventually succumb to the grubby hands of the hairy one. And that’s it. Like so many countless other mundane, dire, appalling, mainly US movies, it’s about a camping trip into the heart of the forest where rumour has it some type of wild-man likes to chew on the bones of men but give the bone to women….but the major problem is – amongst so many other problems – no-one can act, and within five minutes I feel like I’m watching a porn film minus the sex scenes!

Badly filmed, badly acted, badly scripted, bad special effects – pretty much sums up a majority of modern horror films. However, the worse thing about all this is the fact that I’m pretty sure that out there, somewhere, there are people struggling to get their decent films made, and yet diarrhoea like this ambles into the dvd player, tarnishes the legend of Pierce's masterpiece, then disappears down the toilet. 80 or so minutes of garbage is how I’d sum this movie up. Avoid like the plague, and shoot all those involved.