JON'S JOURNAL: Murder most foul (or should that be murder most frog?)

Yesterday afternoon, Prudence took Richard, Corinna and me out to Huddisford for another walk, and we walked along one of the areas next to the little stream we explored the other day.

We were running a bit late in the day, and therefore the light was not all that it could have been by the time that we arrived, and Richard managed to get Prudence out of the car (not an easy task at the best of times).

We walked through an area which - back when I first came back to Woolsery in 2005 - had been a thickly planted conifer plantation. It had been 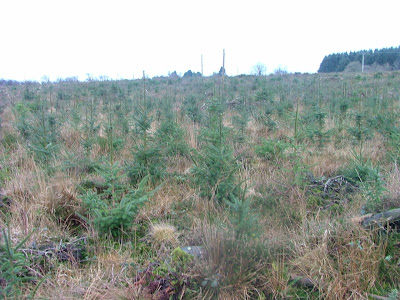 cut, and subsequently replanted about three years ago, and as you can see the young pine trees are making fairly good progress; there isn't any effective scale of reference in the photograph, but I am 6 foot 7, and they reached about a third of the way up me, or double the height of Prudence.

We walked a fair way and as Prudence bumbled her way through the undergrowth she put up several birds including something which I think was a skylark.

A couple of days back I told the sad story:

"We used to have a pond at the bottom of the garden and every spring the garden frogs spawned there.

My mother used to collect the spawn in a bucket and take it up to a friend's pond to release it, so all ended well. That was in 1997/8 and that particular generation of frogs must have lived out their alloted span (or learned their lesson) because by the time we came here in 2005 it didn't happen anymore." 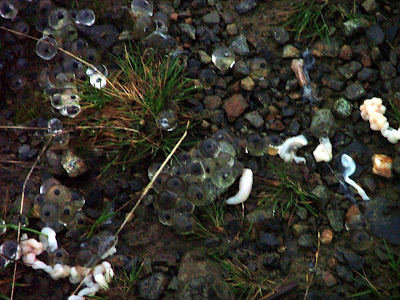 Just by one of the two ditches that feed the aforementioned stream we found some frogspawn on the ground and I thought that we had another case of a similar scenario ...except that here there had NEVER been a pond on the path where the spawn lay.

Then on the way back to the car Richard noticed the froggy entrails lying on the ground amidst the spawn. This was obviourly a tale of batrachian trajedy, when a gravid female was on her way to spawn when a bird of prey, or perhaps a small carnivore had waylaid her. 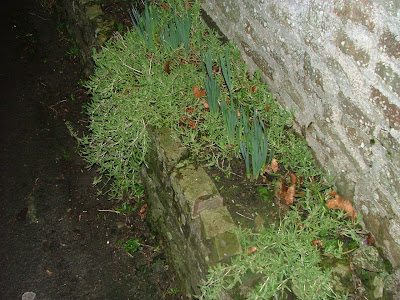 One good side effect of the mild winter (at least as far as I am concerned) is that it is giving a chance for my Carpobrotus edulis or succulent mesembryanthemum to grow larger. I planted it back in 2006, and it started flowering last year, but the heavy winters have done quite a lot of damage to it, and I think that this mild one will finally give it a chance to get established.

It is originally a South African species, but has become naturalised at several locations in the westcountry (most notably at Baggy Point, which is where I first saw it in 1971, and I assume it is still there).

I am very fond of succulents and am slowly building up a collection..