Today I am going to take a chronological look at British jackals. All of this information is publically available but I thought I`d bring it altogether in one place.

Terry Hooper wrote to me on August 12th 1997: 'I am aware that the 1800-1900s saw many Jackal incidents. Animals brought back from and even some bred (obviously) over here as jackal cubs were often sold on as fox cubs! Ditto Coyotes and wolves…These canines were described at times as wolves, which suggestes possible [sic] the Asian Jackal was involved.' (1)

Shuker comments: 'Interestingly, as noted by Alan Richardson of Wiltshire (The Countryman, summer 1975) an entry in the Churchwardens` Accounts for the village of Lythe,near Whitby, North Yorkshire, recorded in 1846 the sum of 8 shilling was paid for “One jackall [sic] head.” As this was a high price back in those days,it suggests that whatever the creature was, it was unusual.By comparison ,fox heads only commanded the sum of four shillings each at that time.' (2)

Karl Shuker also says '…When the supposed wolf responsible for several sheep attacks between Sevenoaks and Tonbridge in 1905 was shot by a gamekeeper on 1 March (Times, 2 March 1905), it proved to be a jackal.' (3). This incident is also recorded by Fort in Lo!: 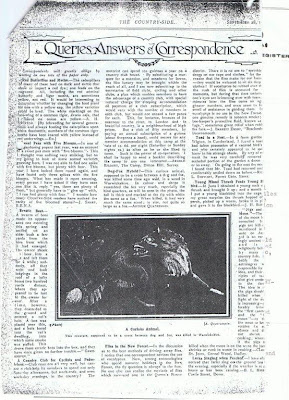 The killing of sheep-the body on the railroad line-stoppage-Farm and Home, March 16-that hardly had the wolf been killed, at Cumwinton, in the north of England, when farmers, in the south of England, especially in the districts between Tunbridge and Seven Oaks, Kent, began to tell of mysterious attacks upon their flocks. “Sometimes three or four sheep would be found dying in one flock, having in nearly every case been bitten in the shoulder and disembowelled. Many persons caught site of the animal, and one man had shot at it. The inhabitants were living in a state of terror, and so, on the first of March, a search party of 60 guns beat the woods, in an endeavour to put an end to the depredations...This resulted in its being found and dispatched by one of Mr R. K. Hodgson`s gamekeepers, the animal being pronounced, on examination,to be a jackal.

The story of the shooting of a jackal, in , is told in the newspapers. See the Times,March 2nd. There is no findable explanation, nor attempted explanation, of how the animal got there. Beyond the mere statement of the shooting, there is not another line upon this extraordinary appearance of an exotic animal in , findable in any newspaper. It was in provincial newspapers that I came upon more of this story. Blyth News, March 14-“ “The Indian jackal,which was killed recently,near Seven Oaks,Kent,after destroying sheep and game to the value of £100, is attracting in the shop windows of a Derby taxidermist “ Derby Mercury, March 15-that the body of this jackal was upon exhibition in the studio of Mr A.S.Huthcinson,London Road,Derby”. (4)

It would be interesting to find out if this taxidermist still exists in .

The illustration below shows a possible dog-fox hybrid from an illustration in The Country-side September 28th 1907 p. 294. The accompanying text reads: 'This curious animal, supposed to be a cross between a dog and a fox, was killed some time ago wild, in a wood in Warwickshire. In colour and shape it resembled the fox very much, especially the hind quarters, as will be seen in the photo, the tail is thicker and marked at the tip with the same as a fox. -ARTHUR QUATREMAIN. (5)

Finally back to Mr Hooper on jackals: 'I`m trying to track down what happened to one that escaped from Sandbach, Cheshire in Winter 1961; also the one seen several times in the Delamere Forest area of Cheshire circa 1974. We know at least one was released near the Shropshire/Wales border in 1993/94 so we`re trying to find out if a farmer or car eventually got it.'(6)

Cities come and cities go just like the old empires

You got so many colours make a blind man so confused

Then why can`t I keep up when you`re the only thing I lose? (The Scissor Sisters-I Don`t Feel Like Dancin`)

The description of the dog-fox hybrid with a white tip on the tail made me think of the side-striped jackal. It is unique among the genus Canis in that it always has a white-tipped tail:

Further, the animal's head shape does resemble that of a side-striped jacks, which has a shorter muzzle and a defined stop. It looks rather bulbous compared to the golden jackal.

The fact that this animal looks like it has a plume tail and breeches, like you'd find on a setter, even makes this argument stronger. Look at the tail and hindquarters: http://www.caninest.com/images/side-striped-jackal.jpg

The rest of these are most likely golden jackals, although this species is hard to distinguish from the coyote. Both can be sheep predators. Coyotes sometimes have a white tail tip, although this almost always indicate a tough of interbreeding with dogs.

Here's one that really has the fox coloration: http://www.outdoorphoto.co.za/forum/photopost/data/517/Side_striped_Jackal.jpg

It must have been a side-striped jackal cub, because it's smaller than a fox but very similar to one.

Or it could have been a warrah pup:

Warrahs were semi-domesticated canids from the Falklands. We know very little about them. It would have made sense that someone would have brought one back as a pet.

They may be been in the genus Canis, because some genetic studies on warrah specimens suggest that they are more closely related to the coyote.

Considering the amount of time it took for animals to be transported in those days, a juvenile side-striped jackal or warrah most likely was born to captive parents.

It can't be a warrah, though, because the warrah was extinct by 1876.

So it was probably a side-striped jackal cub.

In my collection, I have a black & white postcard showing the Sevenoaks jackal after it was stuffed & mounted, with the story printed on the reverse of the card. It was photographed & published by Essenhaugh Corke & Co., but is presumably now out of copyright. Happy to send a scan for the website if this would be useful.