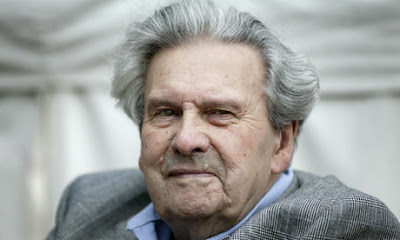 According to the BBC, author, broadcaster and campaigner Sir Ludovic Kennedy has died aged 89.

He was a great man and will be remembered fondly by many people including the Birmingham six, but with him goes a little piece of Downes family lore.

Until the day he died, whenever Kennedy was on TV or mentioned in conversation (yes, strange as it may seem, we had the sort of household where Sir Ludovic Kennedy did occasionally arise in dinner table conversation), my father would grunt and say "That bloody man stole my best overcoat", and complain that the BBC didn't pay its bills.

Apparently in about 1954 (I think this was to coincide with H.M's grand post-coronation tour of the colonies, but I am not sure) Sir Ludo (or plain Mr K as he was then) was doing a broadcast from the village of Maidugari where my parents lived in rural North Nigeria. I assume that it was a radio broadcast and I assume that it was pre-recorded, but since my father, Sir L, Sir Ahmadu Bello, and everyone else involved are now dead I cannot provide any more details.

However, Mr K had conducted an interview with Sir A, a Hausa nobleman who had become Prime Minister of North Nigeria, and whose assasination a few years later would kick-start the Biafra War into action (but that is another story), and he was just top and tailing it with a preface in which he said something like:

"We are standing here in the driving heat, in the rainless arid desert, under the relentless sun that glares down onto one of the furthest flung outposts of Empire,"

and apparently he kept on glaring at my father who (still in his late 20s) had been detailed to look after him, because every time he got to this line, my father and Sir A started to giggle. Apparently it took three or four goes before he finally nailed it. My dad and Sir A were laughing because apparently it was drizzling (much like it does most of the summer in North Devon) and was so cold that Sir L had to borrow my father's overcoat so as not to shiver.

What really rankled is that he forgot to give it back, and it had been an expensive one from the Army and Navy Stores in Victoria St. It had apparently cost £3 10/- and the BBC never paid him back for it. For the next 52 years my father grumbled about it, and instilled in me one of my basic tenets of belief - that doing stuff with the media is nowhere near as glamorous or as important as media folks would like you to think. It is a tenet that has served me well ever since, and one of these days I shall get the BBC to pay for my father's old overcoat.

Slainte Sir Ludo.
Posted by Jon Downes at 9:37 AM

"Forgot"? Maybe. Ludo looks like a shifty old sod, and I'm not sure I'd trust him with my overcoat.