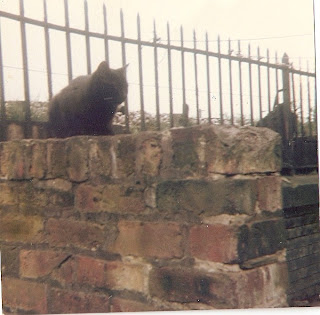 The recent story of the orphaned chihuahua nursed by a cat) reminded me of Jimbo, my cat. Her mothering skills were never called upon to help any of the many dogs our family had over the years but she did mollycoddle plenty of the other animals.
When one of the ducklings or chicks were rejected by their own mother Jimbo would helpfully step in, taking the abandoned birds under her wing (so to speak) and allowing them to share her food basket at night. In the earliest stages of their lives felid's fosterkids would follow their new Mam everywhere and when any of the other cats in the house showed an interest in the babies that, let's face it, was probably a more natural one in that they tried to eat them, Jimbo valiantly, like any mother, leapt in and defended her brood, tooth and claw.

Jimbo's efforts were not just restricted to unwanted birdies. My Uncle Michael was apparently distraught for several hours one day when Mary, one of his adored white mice went missing. The family searched high and low but the little rodent was eventually discovered safe and sound in Jimbo's basket.

The downside to the loveable felid's affection for all things helpless was that on at least one occasion I am aware of she had to be foreceably prevented from adopting a rat her brother Billy brought home stunned after a night on the prowl....
Posted by Jon Downes at 10:20 AM

She reminds me of the lioness that took in an oryx calf: