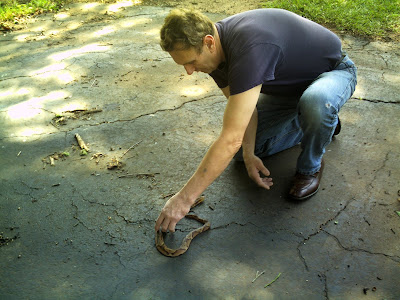 Here is the first of two bloggo postings that we received, unsolicited, from Joel La Rocque, who is - I have to admit - someone I had not heard of before....

I have been working with venomous species of snakes for 40 years now and I often receive stories about unusual reptile events such as the one I just read about the tame crocodile that was ill and nursed back to health by a young boy, and they are now friends. I fail to see why it is shocking that a reptile can take up with a human.

As I sit here, I am accompanied by two copperheads sitting on my desk. 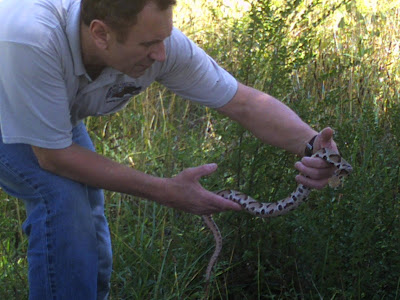 They are not confined in any sense.

About six years ago I made a discovery that changed my life. I now have a number of venomous snakes, all fully functional and they are as tame as grass snakes. People come over to watch the "show" as they call it. It is no show, just one human and a whole lot of limbless friends doing what they do best; being kind to one and other.

It is written nowhere that snakes have to bite; I don't know who came up with this ridiculous theory. Felix, my northern copperhead had a section of old shed stuck over his right eye and nostril. He was fit to be tied and in distress. I had no way of helping him other than just picking him up and wetting dow 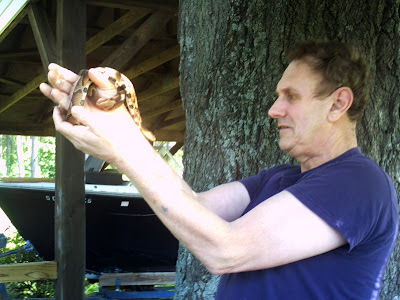 n the dry skin and removing it with tweezers. This did cause some pain as he would jerk when I hit an area that was really stuck. We worked for the better part of two hours to get him free and he never once struck at me. I realised this and went to the other tanks. One by one I became familiar with the snakes and all have accepted me as a non-violent animal and allow me to handle them when ever I wish. That was the day I threw down my hooks and tongs for good.

I am enclosing three or four photos of snakes in the wild being examined by me. These pictures are less than twenty days old. What really gets me upset is that I wasted 34 years of my life listening to theories that came over here with Columbus; what a fool I was.

God created snakes, then man. Both have a task to accomplish while on this earth. If our paths should cross as we travel this glorious land, let us both look and wonder, then part in peace. For God has placed us here, to l 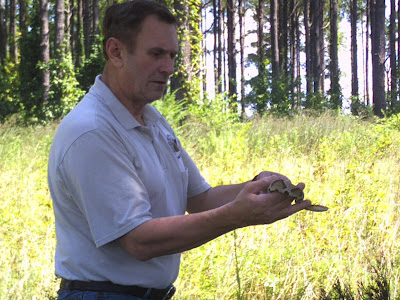 ive in harmony and we are subject to His / Her law. So let us continue to learn and pass these truths along to the next generation. An open mind has the capacity to hold the wisdom of all the ages past; whereas a closed mind is void an empty, unable to understand or grow.

The snakes as you say are as tame as grass snakes, but to my knowledge grass snakes are not tame, they are wild. i have my own collection of snakes and i have also visited NERD who have one of the best snake reputations. They don’t even take their Venomous snakes for granted. This article just encourages people to go and pick up wild Venomous snakes. So the chance of someone getting bitten and dying is much higher.

As a herpetologist and herpetoculturalist, I must concur with monkey boy on this. In this profession/hobby, we have a saying...'its not if you will be bitten, it is when.'. Although snakes and other reptiles do seem to have a certain familiarity with their keepers after a time, one must not lose track of the fact that they are wild creatures that function almost completely on a instinctual basis.