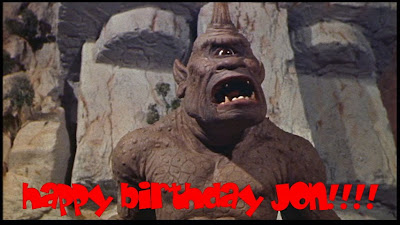 I sent this to Jon the other week, as I was not sure of the date of his birthday. Unfortunately, it didn't get through in time, but better late than never, as some twit says. I used a picture of the cyclops from Harryhausen's Seventh Voyage of Sinbad for the e-card, rather than a bigfoot or chupacabra (s), because the important characteristic here is inspiration. Harryhausen's work inspired me and doubtless thousands-if not millions more, if not actually to take up special effects, to view the universe in a more magical way. Jon, like Harryhausen, is doing his considerable bit to show that the world can be a place where mysteries can be solved, and dreams fulfilled. Inspirational people like Jon and Ray are desperately needed in our world in which the forces of inertial probability often seem to pull towards the negative. And needless to say, I'm very honoured to count him as a friend.

So a belated Happy Birthday Jon, and looking forward to the next fifty years,(at least!)
Posted by Jon Downes at 9:52 AM