A BIG THANK YOU TO EVERYONE 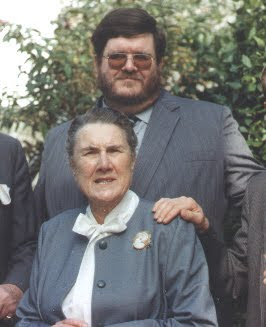 I would just like to say a big `thank you` to everyone who made my 50th birthday yesterday so memorable and enjoyable. As you mostly all know, I am a soppy old git who wears his emotions very close to the surface, and I blubbed like a big softy quite a lot yesterday.

I told Corinna some time ago that I didn't want a birthday party whereupon I drank too much with my friends and cronies. I can do that whenever I wanted, and to be quite honest, I always get melancholy on my birthday and miss my mother, who died back in 2002. I then forgot about it all, and was overwhelmed when - after visiting Marjorie Braund in the hospice (as I have done every day that I have been able) - I found that my dear wife had arranged a birthday tea for me for me of the sort that I haven't had since I was about 12.
Also there were Roy and Kaye Braund-Phillips and my three beloved nephews, Richard F, Graham, Oll, and by chance my old friend Richard Ingram from Exeter who made me a Victorian moustache cup.
Later that evening I was summoned to The Farmers Arms where Jennie the landlady had made me a magnificent cake, and all the waitresses kissed me. What a lucky fellow I am.
And then when I came back I found this tribute to me from Nick Redfern, and I finally burst into tears and had to be consoled by the dog.
My presents included rare books on Hong Kong from Richard Muirhead, a gilded thylacine made by Fleur, and a magnificently silly hat made by Olivia.
I don't deserve any of this. I am not a terribly good writer, and my achievements are fairly esoteric, and I am - when it comes down to it - basically a bad-tempered old hippy who drinks too much, and I am overwhelmed by all this attention from everyone. But, at the risk of sounding like some horribly shallow Hollywood actress, on her fourth marriage and eighth facelift, the only thing that I can say is "Thank you, and I love you all"....
Posted by Jon Downes at 10:27 AM