Stereoscopic Sunday is here! Red and cyan glasses at the ready; this week’s photo is of the ultimate showdown. Who will be victorious? The smart money is on Pikachu, as he has bested Mewtwo in the past, a feat that thus far no Doctor Who villain has proved capable of. (Cue long rant by Richard in the comments section graphically describing Pikachu’s potential demise when faced with a Dalek, probably). 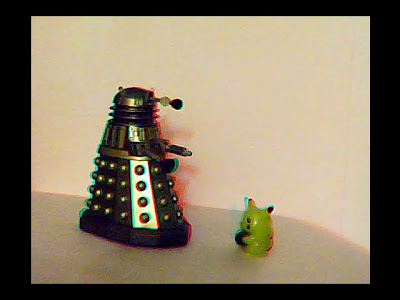 ‘Bats’ not a creature you want to mess with, then.

RICHARD FREEMAN WRITES: Pikachu's attack is electricity. Electricity cannot harm somrthing in polyoncarbenated armour such as a Dalek. Infact early Daleks ran on electricity conducted through the metal floors of their city on Skaro.

I once attended a Science Fiction convention in Plymoth were someone had made a great little film in the style of the faux Japanese gameshow Banzai. You had to gues how verious pokemon would be killed. Pikachu had the possiblilty of being stabbed by a big butcher's knife, shot with a hand gun or having mass molecular desruption from being shot by a Dalek. He has shor by a Dalek and destroyed amoung much cheering from the crowd.

A Dalek can only really be bested by one foe...The Doctor.