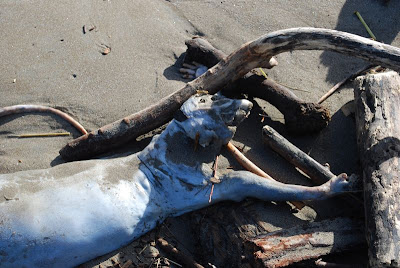 Just in: another strange carcass found on a beach; this time in Gisbourne, North Island, New Zealand.

It was found a day or so back by bloggo correspondent and doyen of NZ Cryptozoology, Tony Lucas.

You must admit that it looks considerably freakier than the Montauk Monster, with a weird ratlike tail and a fleshy protuberant nose.

In our opinion it is no placental mammal known to science.
This time it certainly ain't a dead racoon that had been given a Viking Burial by a bunch of stoned surfers. It was, by the way "about the size of a fox terrier" says Tony. 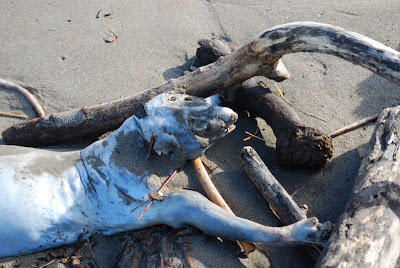 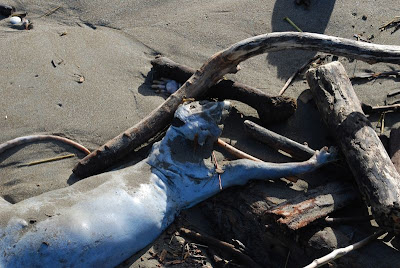 Brush-tailed possum-- an introduced species that looks like a cross between a raccoon and a Virginia opossum.

It was introduced to New Zealand from Australia.

The toes give it away.

Also, we can tell whether it is placental or not, if it is turned over. Male marsupials have distinctive characteristics from placentals, and females have a pouch.

I know this because I have some experience with our native marsupial. In fact, I thought that's what it was until I read it was from NZ.

I agree with Retriever, here are some good pics of the feet,

It's the two big toes on the hind feet and the large gap between toe pad and foot pad that sold me....