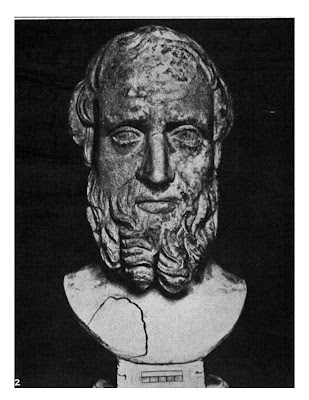 Herodotus was a Greek Historian who lived c 490-415 BC. He traveled widely in what was the then knowN world. He was the first person to systematically collect data, test it in as much as he could and present it in a narrative to the reader. He is widely thought of the Father of history, ethnography and anthropology. Though many of his stories were thought of as hard to believe much of what he has written about as since been shown to be accurate.

“ Another bird is the phoenix; I have not seen a phoenix myself, except in paintings, for it is very rare and visits the country (so they say at Heliopolis) only at intervals of 500 year, on the occasion of the death of the parent-bird. To judge by the paintings, its plumage is partly golden, partly red, and in shape and size it is exactly like an eagle. There is story told about the phoenix which I do not find credible; it brings its parent in myrrh all the way from Arabia and buries its body in the temple of the Sun. To perform this feat, the bird first shapes some myrrh into a sort of egg as big as it finds, by testing, that it can carry; then hollows the lump out, outs its father inside and smears myrrh over the hole. The egg shaped lump is then just of the same weight as it was originally. Finally it is carried by the bird to the temple of the Sun in Egypt. Such, at least, is the story".
Posted by Jon Downes at 2:34 PM