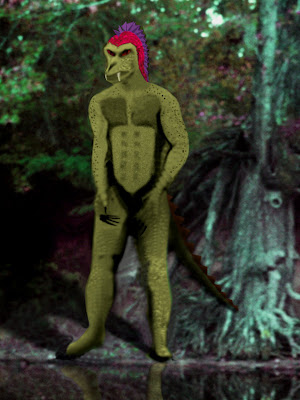 I've already published two blogs on this site dealing with the curious appearance of a "Lizard Man" cryptid in the North of England. The creature, which I have been told Northumbrians call The Splitback Demon (although I've only the testimony of a singular Northumbrian up to now regarding this) looks pretty much like a cross between a1950s "B" movie reject and a diminutive Godzilla. Still, as cryptids go that'll do for me.

To be honest, and to quote Alice, the tale just gets curiouser and curiouser.

The Splitback Demon is, from what I can gather, an anthropomorphic reptilian-human cross with a mane of vivid-red hair, a long tail and a rather ostentatious spinal fin. He also sports two red, glowing eyes, scaly skin, four-inch long talons, a purple-red cockscomb and a dog-like snout. He is said to be about 5ft tall, which suits me fine as a 50ft tall version, although much easier to spot, would be a damned site harder to lasso.

Seriously, though, I'm leaning towards the idea that their may be a degree of credibility to the two eye-witness testimonies which I've secured first-hand to date. I'm currently compiling a detailed report – which is looking more and more like a book manuscript with every passing day – but still need more anecdotal evidence regarding other, similar creatures which may have been seen preferably (but not exclusively) in the British Isles. I'm pleading with ANY CFZ supporters who may know of lizard-man type stories to send them to me, please, with their sources.

And here's another funny thing, as if lizardy-type blokes running around the Northumbrian peat bogs wasn't funny enough; It has recently come to my attention that around the time Witness B, as he prefers to be called, espied his lizard-man, another unconnected witness had an extremely odd UFO encounter at exactly the same location. I really didn't want to go down the UFO-Reptilian route with my research, as I've hitherto thought it to be a load of old baloney, but I wouldn't be much of an investigator if I deliberately turned down the opportunity to glean insight into the matter simply because it didn't juxtapose well with my philosophical leanings. The truth is that the location where Witness B saw his lizard-man is so obscure and remote that two unconnected Fortean encounters occurring there at the same time is a hard concept for me to swallow.

Soooo….I'm also looking for accounts of lizard-man appearances that are ostensibly connected with UFO sightings. Now I'm going to have to be tactful here, but – how shall I put this – I'm not incredibly keen to hear tales of the late Queen Mum being a human-munching reptoid, Gordon Brown being the secret head of an Intergalactic Council which is trying to take over the earth on behalf of the lizard-men, etc. (My, how times change. It's only a couple of months ago that our own Mr. Downes was being accused of this and worse).

Anyway, I think you'll get my drift. I'm looking for tales of lizard-men and, if there are any, a UFO connection to them. If there isn't a UFO connection, then plain ol' lizard-men stories will do.
For your edification I've attached an artist's impression of what the Splitback Demon allegedly looks like. Witness A tells me that looking at it brings his arms out in goose-bumps, which, I think, means that it is reasonably accurate.

If you should bump into this dude whilst out shopping, or whatever, please tell him to get in touch.
Posted by Jon Downes at 11:39 AM

Mike, I've received a handful of 'lizard man' reports over the years in regards to Kent and Sussex. And even a Goatman from London and a Mantis Man also...of course, many such tales get lumped in with Ufology, but most reports I've received suggest genuine witnesses who must surely have been hoaxed. Or, Croc from Rod Hull's The Pink Windmill has escaped Grotbag's grasp.