WORDS FROM THE WIZARD 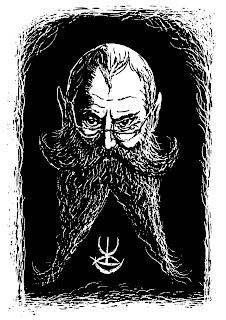 Our old friend Tony "Doc" Shiels, who is still the nearest thing to a father that I have alive, writes to me regularly. As readers of this blog will know, Tony had a close run in with cancer recently, but came out the other side. The cancer seems to have gone into spontaneous remission, or perhaps he magicked it away. One of his two latest letters which arrived this morning included a piece of news that he wanted disseminated across the Internet, and another piece which I thought was such a marvellous quote I wanted to share it with you all.

"A bit of great shamanic news which should be stuck on your website is the fact that I have handed the mantle: "Wizard of the Western World" to Keith Barry. Let's keep it funny. It happened on the first of the month.

Wizard of the Western World.
Enchanter of the East.
Necromancer of the North.
Sorcerer of the South.

That's WENS (ooops!), let's make it NEWS! So it will be Keith Barry www.wot.ww, I suppose.

I'm serious about this lads, and Keith is the very best magician in Ireland, apart from me. He has a very beautiful wife, Mairead, and a sweet baby daughter, Breanna. On January 3rd I gave baby Breanna a soft toy Cernunnos. The child was delighted. Every Celtic child should have a horned god in its cot."

I have often been asked why I consider Tony to be my surrogate father. It is simple, but until recently it would have hurt too many people for me to explain. In the summer of 1996 my first wife left me, and - as most people would - I turned to my father and mother for support. They are both dead now, and so I can explain what happened next, even though it is not particularly pleasant for me to do so. My parents were very old-fashioned, and had a singular view of society. I was the first person in my family to get divorced, they said, and by doing so I had brought dishonour on the name of Downes. During the horrible three months had followed, my parents pretty well disowned me, and the only person from their generation (okay, he is over a decade younger than they were, but who is counting?) to give me comfort and support unreservedly, was Tony. I had always been fond of him, but since 1996 I have loved him.

Tony is a painter, a surrealist, a playwright, a performer, a magician, a prestidigitator, and until now he has been the Wizard of the Western World. Although he writes, and speaks, in the words of his own peculiar psychic landscape, he is undoubtedly the wisest man I know. He has said the following passage to me on a number of occasions, but this is first time that he has ever written its down for me, so - at last - I am able to share the wisest words I have ever heard or read about the nature of fortean phenomena. 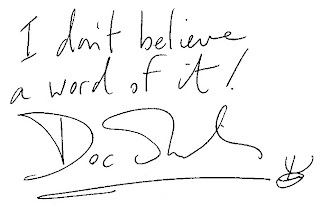 "99% of so-called "Forteans" simply don't get it. It ain't "really weird", "it" is just stuff that happens all the time.

Good old Doc.
Like everyone at the CFZ I was pleased to receive the news that his cancer had gone into remission.