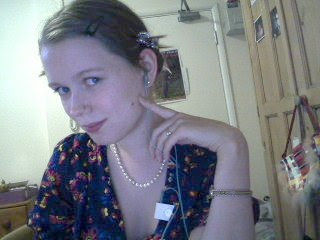 Welcome to our newest guest blogger - the irrepressable Miss Fleur Fulcher. She turned up unnanounced at the 2008 Weird Weekend, and seemed to somehow stroll around the place causing high strangeness wherever she trod. The nearest analogue any of us have ever met to a real-world version of J.K.Rowling's Luna Lovegood, we have persuaded her to occasionally step out of her wardrobe full of pretty frocks and strange inhabitants in order to give us her insight upon the natural world. So, she chose to write about strange lobsters...

With my degree in fashion journalism, I am the perfect person to write about what this season’s most fashionable crustaceans are doing.
Often overshadowed by the flashier inhabitants of the sea, the lobsters would like to remind us all that they too can be crazy-looking, ancient, giant or in other ways strange (and delicious).
The lobsters this season are not the usual drab looking creatures. They are bright blue, green, purple and even two toned.
The largest lobster on record weighed over 3 stone. Somehow I think that even my mother, fond of lobster as she is, would be overwhelmed if that turned up on her plate.
There have been reports since a few months after Hurricane Katrina of huge spiny lobsters up to 6 feet in length in the Florida Keys. Some believe this is due to unusual nutrients being washed into the water during the hurricane. In typical American fashion, the size of the behemoths of the sea floor does not stop the locals from turning them into dinner.
If giant spiny lobster isn’t your thing, then you could head over to Japan and a nice cone of lobster ice cream, (they also have a charcoal ice-cream in one parlour). Or try the ‘Love Maine Lobster Claw’ game, the same as the infuriating ones at fairgrounds where you try to win badly made fake Disney toys, but with live lobsters scrabbling around waiting to be caught. Infuriating animal rights activists worldwide, this game has been a big hit in the US. 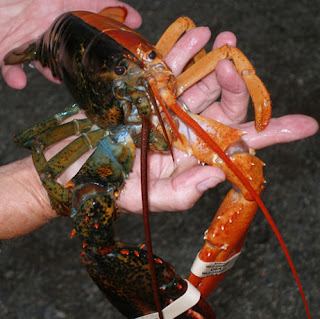 Possibly the strangest looking one I have seen thus far is the orange and green specimen found in Maine by Alan Robinson, who - deciding it was too unusual to eat - donated it to the Mount Desert Oceanarium, where it will live out its days. Apparently, the odds of a lobster being two coloured like this is 1 in 100 million.
In December 2008, a lobster with 4 claws was caught near Newport. You have to wonder whether they charge the diners extra for ones like that, a bit like the sorry looking one-clawed ones that always lurk at the back of the pick-your-own tank. 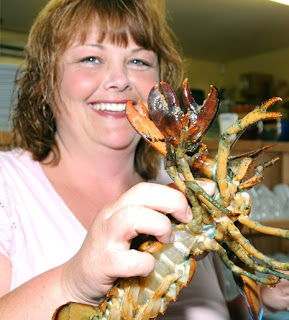 So next time you go to an Oceanarium or the National Marine Aquarium, don’t spend all your time with the fish, check out the lobsters that might be lurking there too.
Posted by Jon Downes at 5:28 PM

Talking of the national marine aquarium in Plymouth it is now home to huge 12 pound, 9 ounce lobster.

The lobster called 'Mad Jack' is thought to be over 100 years old.