Unknown animals in the pet trade? Surely not...

GUEST BLOGGER MAX BLAKE
In the last year we have met a number of frighteningly intelligent young people who look certain to overwhelm the CFZ over the next few years. One of the youngest, and most frighteningly intelligent is Max Blake, who is the youngest speaker at the forthcoming Weird Weekend. He will be talking on the subject of how unknown animals, smaller ones at least, sometimes turn up in the pet trade. As a taster, and as the first in what will be a series of guest bloggers, he has written us a short article on this little known and fascinating subject...

Bernard Heuvelmans has been oft quoted as saying 'There are lost worlds everywhere' to show his belief that new animals can turn up in the most unexpected of places, but undescribed animals sat in a small cage stacked under dozens of others in the corner of someone’s room? It sounds like we are beginning to take this quote a little too far...

However, in the last few years a surprising number of animals have turned up in the pet trade. In-country collectors often grab what ever interesting animals they can (for instance) for the exotic invertebrates trade. They often come across new species to science, although very often the collectors have known about them for ages, and by the time hobbyists such as myself get hold of them someone has usually identified them to genus level and we can make a pretty good inference about their captive care. These are usually common and easily kept species like cockroaches (indeed, at the time of writing, a German friend of mine is keeping about a dozen species of cockroach which have no scientific name), but quite often larger more impressive animals like scorpions and giant centipedes. 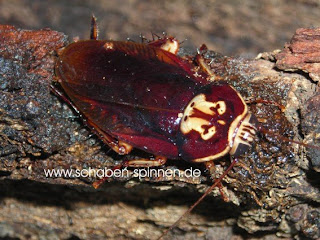 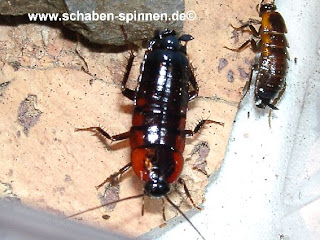 These two cockroaches are known to family level only. The species with the white markings on its head comes from Sri-Lanka, and the other species, the well known African Bullet Roach, comes from Africa, but no-one knows for certain where. There is a rumor that the originals came from the slopes of a volcano, but its name eludes me. 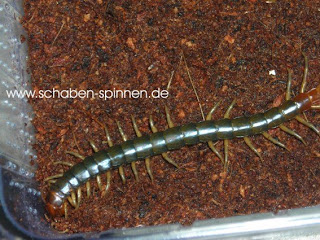 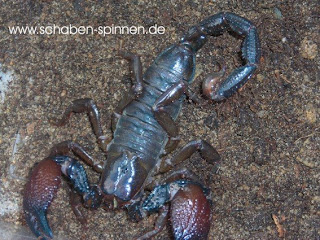 THE STORY OF `CUDDLES`

The case of Cuddles is one of the best. A bottom dwelling shark, she was bought in by a pet shop, sold to an animal rescue centre, taken to a zoo for two years before being moved, again, to an aquarium where she was, finally, exhibited in an aquarium and viewed from the side by someone with knowledge on sharks who “realised she was special”. She is about 700mm long, covered in bristles which are themselves covered in red algae and who moves more like a hopping frogfish than a shark. Shark experts who have examined her say she is not a known species, and appears to be adapted for an existence in deep caves. Her irises are permanently open, suggesting a permanently dark environment, with very wide nostrils and, most interestingly of all, a fifth gill. This is used as a plankton sieve, and you will know about other plankton eating sharks such as the huge whale, megamouth and basking sharks, but this is a plankton eating shark with a difference. It can easily alter its diet to large food items such as fish or benthonic invertebrates.

Some other plankton eating sharks have been known to eat large food items to supplement their diet, but Cuddles seems to do this with much, much greater regularity than any other plankton eating shark. I can find no reference to her scientific name on the internet; however a writer for a well known diving magazine has stated that Cuddles has already been described as Pseudoginglymostoma brevicaudatum, a small species of nurse shark and, according to him, “the dozy creature was transformed, overnight, into a freak of nature” by the media.

Seeing as this is the only reference I could find to this sharks current name and that no-one else has commented on any articles saying what Cuddles really is, this writer’s statement must be taken with a pinch of rather potent salt. The mystery, it appears, still lingers. For something to do in the mean time, you can visit Cuddles in the Sea Star aquarium, in Coburg, Germany. 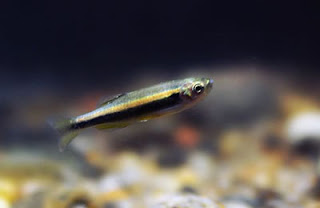 The "new danio" is currently undiscribed and was found by aquarists in India who saw it for sale in a couple of shops. It is known to be a Cryprinid. 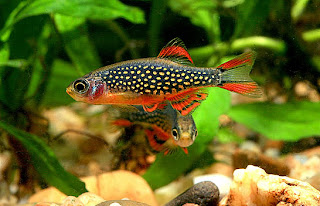 Celestichthys margaritatus is a funny little fish. It is certainly a Cryprinid, and was originally called a Galaxy rasbora. This worked for a year or so, but then, someone who appears to have no grounding in scientific research, desided to say on a large aquarist forum that it is not a rasbora, and was a danio. He then called it a celestial pearl danio, and so, pretty much becuase this is a stunning photo and the people that kept it were the sort of people who much have everything correct and proper, called it this new name on pretty much no evidence for it being so. Why this species' common name was changed so rapidly because it wasn't "right", and yet Labeo sharks are still called sharks because of their resembalence, I will never know. Anyway, so someone had a quick look at the fish, and described it Celestichthys margaritatus. By this point its numbers were running down in the wild due to over colecting. Now, there is pretty much a straight export ban for this species, and captive breeding efforts are underway to keep it in culture. However, new evidence has been cited for this species being a Danio species, and we may see its genus being changed.

Max will be appearing on stage at the Weird Weekend this year talking about this very subject, and we are hoping to have some of these currently unknown creatures on display. He will also be featured on RadioCFZ within the next few days. So watch this space....

I'd like to attend the Weird Weekend this year if I've got the time and money. I might invite my 14 year old daughter because WW seems more orientated to the younger delegate than most of the other conferences I go to, which she flatly refuses to accompany me on.

(BTW: Jon, I've finished "Island of Paradise". It sounds like you all had a fascinating and fun time on Puerto Rico. It was a thought-provoking, hilariously funny and very poignant book. In places it was disturbing. Time will tell if your theory is correct. If it is I feel sorry for those forest snails/cave snails, having to get used to a diet of guano! I hope that Darwinian evolutionary forces never toss humanity that undertaking!)