Big cats may be a mystery - people are just unpleasant 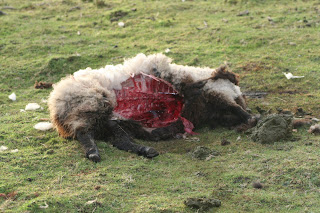 What a strange year this is shaping up to be. Regular readers of my writings here, and elsewhere, will know that Max Blake (one of a frighteningly intelligent young people who seem to be scampering up the CFZ hierarchy these days) has been on the track of the elusive Somerset big cat for some months now. On November 20th 2008, he rang us up and told us about this news story from the Western Daily Press:

“A farmer is calling in sharpshooters to deal with a big cat believed to be responsible for destroying 28 of his pedigree sheep and dozens of others in a grisly three-week spate of killings in Somerset. On Thursday John Chislett, 28, who farms on the Mendip Hills, told how he saw the beast he believes is responsible – a black puma-like animal which calmly stopped to look at him, then disappeared over a hedge. He said: "The sheep had deep rips in their sides and other injuries which would not have been caused by a dog. Then two days ago when my fiancée and I were up there where the sheep were attacked we saw a big black cat. It was like a puma, nothing like a dog. It was just walking down a hedgerow only 30 yards away. It stopped and looked at us and then just carried on walking and jumped over the hedge.”

In the past month three farmers who keep sheep in the area have lost dozens of livestock, killed or fatally mutilated by a mystery animal.

Mr Chislett, who lives in the Mendip village of West Cranmore, described his horror at finding animals from his 250-strong flock, dead or dying at Long Cross in Stoke St Michael. Speaking from the scene of the tragedy yesterday he said: "This is no dog. The sheep have slashes across them, deep rips in their sides, their guts have been pulled out and their ears ripped off. Two have had their throats ripped out. A dog will chase, worry, kill, and leave, or the sheep often die from the worry of the chase – but this is not the work of a dog.”

Max was particularly interested because he - quite literally - only lives just around the corner from the scene if the attacks. He knows several people, including his own sister, who have seen what appear to be mystery cats in the area, and has always had a deep and enduring interest in cryptozoology. Showing powers of persuasion which I certanly never had at his age, he persuaded a young lady called Cassie to accompany him, and - taking advantage of a spate of free periods bestowed upon them by a munificent Education Authority - they went in search of adventure.

When they arrived at Chislett’s farm, they found that the situation is worse than they had thought. The predations have become so numerous that he is seriously considering giving up his flock. He has seen a light brown, puma-like animal on a number of occasions, and other people in the area have reported seeing similar creatures, as well as `black panthers` and `a lynx with a long tail`. He showed Max and Cassie six of the bodies of his slaughtered sheep. They took photographs, the most explicit of which is printed - exclusively - above. Interestingly, Mr Chislett told them that although some internal organs - including lungs - had been left in the carcass when originally found, they had subsequently disappeared, which leads one to suspect that the damage to the cadavers has been exacerbated somewhat by secondary predation - probably by foxes.

Max took a sheaf of the new CFZ Mystery Cat reporting forms with him, and has also started a publicity campaign in his local area appealing for more witnesses. Max has a part time job at a local outdoor sports centre, and is in a prime position to gather more information.

At the CFZ annual general meeting last weekend we gave him the CFZ trigger cameras with which to try his luck. He obtained permission from Mr Chislett and put them up on his land. Sadly, when visiting one of them this morning he found that it had been stolen. He is very disappointed, as are we. We worked very hard to raise the money to buy the cameras, and it is particularly galling when some oik just decides to make off with them. We are now starting a fundraising campaign to raise money to buy replacements. There is a paypal donation button on the right-hand side of this page. Please give generously, because it is only with your help that our investigations will continue.
Posted by Jon Downes at 2:42 PM