GUEST BLOGGER MATTHEW OSBORNE: How to corrupt a Town Councillor 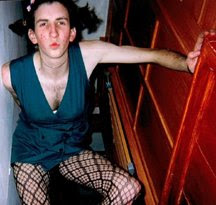 Matthew Osborne is an increasingly familiar face here at the CFZ. We have only known him a few years, but now we wonder how we would have got along without him.

In this libellous screed that follows he accuses me (in particular) and the CFZ (in general) of having corrupted a nice, clean-living, Methodist, boy with a seat on Bideford Town Council. However, this rather revolting picture of him in women's clothing predates his involvement with the CFZ and confirms much of what we know about Liberal politicians...

Never mind Matty, we love you dearly, and have no idea how we would function without you.
When I was working for the Prince’s Trust in Barnstaple along side the Devon Fire and Rescue Service, I was asked by the Chief Executive of the Parent Charity and Contract holder for Prince’s Trust North Devon (Torridge Training Services) if I could help out as the `Muscle` on a new project he wanted to trial, and being I was always willing to help I agreed.

The Concept of the Project was that free at POD we would feed and offer Key Skills training to a group of Homeless people from Bideford. Much as the `little white town` might seem to be idyllic and shine on the surface, the moment you scratch the surface the problems are easy to find.

I enjoyed the project and as part of the deal with the clients if they attended we would arrange an author to come and speak to them. For 6 weeks I worked alongside Pat (the project manager)with the project, as whist my spelling is bad I knew how to work most of the English language and enjoyed the sessions putting my knowledge and skills from working for the newspaper in Oxford to help the people tell there stories, partly improving their English skills so they can be closer to work and there fore closer to finding a permanent residence and partly to allow them catharsis.

At the end of the run of sessions and as the Prince’s Trust team was winding up Pat found a local and well published author, one Jon Downes!

Jon and Richard came to TTS to talk to our six clients and people from other courses who wanted to hear the talk and so inspired the clients that two volunteered to support the CFZ events and in exchange live in the local woods supported with enough to keep them going. Unfortunately that did not come to pass due to the ill health and the sudden death of the young lady.

The other person Jon inspired was me.

As a current Town Councillor for Bideford, Jon saw the chance to get into the know about how the system works, (I blame myself for Jon’s current plans for World Domination) and so I was invited to an evening meal. At which Jon sought information and my help and asked if I could help out at the event he was running. (WW06).

So the Hook was baited and I was being reeled in!

Over the next two years, through three girlfriends, two job roles, and five cars, I became more involved and helped write a new constitution and slowly get the ducks in a row for the charity commission.

With the latest car, a 1.7TD Cavalier (Isuzu) giving enough space to transport Jon, not only comfortably and with my IAM/RoDAR training safely (most of the time) I have become a driver for the team as well.

I have also on one occasion at the WW filled in for the break in technology that Dave BP was working on. I demonstrated CPR on a plastic dummy and had (Uncle) Jon conducting the mass singing of a Nursery Rhyme.

I have also tried to regain a seat on the Town Council but as I have been unsuccessful and my job is giving me solid days work, I will devote my time to FASW and CFZ, and hope that life affords me good opportunities with both roles.
Posted by Jon Downes at 11:34 AM

Well Done Matt! a good piece. I remember it well, we had fun though didn't we? You were a great help to me and you gave the students enthusiasm to learn, motivation and someone to look up to. See you soon. Pat xx