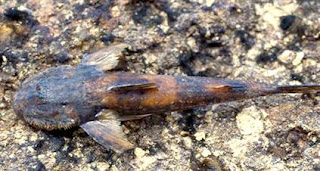 A new species of catfish, which - it is claimed - "could grasp and climb rocks with its tail and mouth", has been discovered in a remote part of Venezuela, and - bizarrely - shares traits with two different fish families — Loricariidae (armored catfishes) and Astroblepidae (climbing catfishes). It has bony armor that protects its head and tail, and a grasping pelvic fin that helps it to climb vertical surfaces such as rocks.

Studies of L. wahari confirmed that the species is a member of a group that bridges two catfish families. Bony plates on its head and tail, plus other features, link the species to the Loricariidae, the widespread and successful family of fully armored catfishes. but the specialised pelvic finthat decouples from its body and moves backward and forward independently is otherwise found only in a family of climbing catfish restricted to the Andes, the Astroblepidae. Climbing could be an advantage to these fishes because of the irregular and sometimes high-flow of streams in these elevations.

So many new South American Catfish have been discovered in recent years that taxonomists have had to resort to a novel way of cataloguing them. David Marshall, of the Ryedale Aquarists Society and an old friend of the CFZ writes:

In the late 1980's a small variety of loricarins new to the U.K. aquarium hobby began appearing in aquatic retail outlets. All of these fish were given exotic-sounding common names so a small white fish with black stripes was sold as the emperor or zebra peckoltia, a fish with wavy black and yellow markings the scribbled plec, and one with a dark black body and white spots was sold as the vampire plec.

From the scant information that could be obtained, mainly through friendly retailers, U.K. aquarists were led to believe that all of these fish had originated from the Rio Xingu area of Brazil and were vegetarian by nature. It would take sometime for this information to be corrected, and make aquarists realise that these particular loricarins’ natural range extended beyond the Xingu area and that their dietary requirements were actually very varied.
As more of these loricarins began to appear, the sales tickets on their aquaria (first seen in Yorkshire through L 018 - Baryancistrus niveatus 'golden nugget') began to show a sequence that began with the letter L followed by a series of numbers. Shortly afterwards the letters LDA began the sequence with some of these fish. The shape and character of the sequenced species was also starting to change as no longer did they all have the look of a miniature plecostomus, but some resembled whiptail catfish, others large otocinclus, and then came the truly bizarre sight of little loricarins with grey and black marbled patterns - best described as elongated wine gums with fins. What on earth was going on?
When all was revealed, it became clear that these loricarins had been available on the European mainland for some time before we had seen them in the U.K. They were appearing not only from the Rio Xingu, but from many other areas of South America. As each new fish had been discovered, the well known German magazine DATZ had featured their portrait.
Worried about varying common names that had been given to these fish in the trade, the DATZ Editorial staff had come up with a system in which each new fish would be given an L-Sequenced number that would allow it to be universally recognised, until the scientific community could get through the tortuous procedure of giving them a proper scientific name. Going back in their records revealed that the fish U.K. hobbyists would come to know as the `white spot pleco` had been the first to be pictured, so this fish began the L Sequence as L 001 (L1). With some of the new species, it was clear to see that these were only colour, or regional, variants of loricarins already sequenced. So this was indicated, by adding a lower-case letter at the end of their number. Thus L O90d is the fourth known variant of ‘panaque species Peru'.
The Editorial staff of the rival German magazine Das Aquarium had also received photographs of other new loricarins coming out of South America, along with different-looking photographs of some of the L numbered fish, so not to be outdone they created the LDA numbering system for their photographs. Starting this sequence was the gold peckoltia which thus became LDA 01 (LDA1).
So from the start, we had confusion with different L and LDA numbers applying to the same fish. This became even more compounded when regional and colour variations of sequenced loricarins would slip through the system, thus giving them a totally different L number than that already assigned for their kind.
This would become partly to blame for further errors occurring, as other aquatic publications began captioning loricarin photographs with incorrect L and LDA numbers. These problems aside, the two sequencing systems remain the recognised - and best - way to keep a record of all the subject species, until the arduous task of scientifically naming them all is finally completed.

It is hard to keep track of LDA numbered fish through publications available in Britain, but by September 2003 a total of 76 loricarins had been sequenced. Thankfully, information on the L numbered loricarins is easier to come by, and of September 2004 the sequence had reached number 387.
One has to wonder why all these new catfish species have suddently turned up at once. Is it merely that the Amerindian collectors are now plundering hitherto untapped areas? Is it that they are better at their job than they used to be? Or could it be that something is causing a far greater degree of speciation than usual, and producing a bucketload of new species. This peculiar new species with which I started this column would tend to support that hypothesis.
Posted by Jon Downes at 1:34 PM