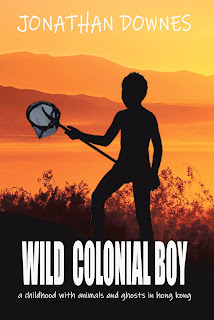 JON WRITES: Anybody who has been a CFZ watcher at any time this last thirty years, will know that I have been promising to write a book about my childhood in Hong Kong, and my early introductions to the arcane world of Fortean zoology.

Well, half a century after I first thought of the idea, and over forty years since I actually started writing the bloody thing, the first edition is finally out.

For those of you who are interested in the more Fortean aspects of the stories, let me assure you it includes a bunch of musings on the subject of the final Hong Kong tiger, what happened to Hong Kong’s foxes, accounts of mysterious apes in the heavily forested areas on the south of the island, the complicated story of St. John’s macaque, rumours of giant earthworms, and all sorts of other things besides.

I stress that it is the first edition, because there are still a few minor typographical errors needing to be sorted out. Louis and I are working on them on as we speak, and so the first edition – especially one signed by me – is likely to become a collector’s item in very short order. And you can purchase one of these rare objects by clicking on the link below...