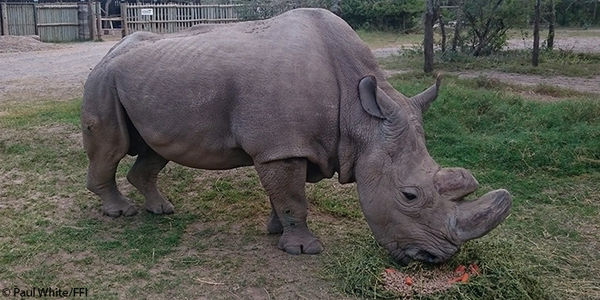 The rhino in this photo is named Sudan. He's the last natural-born male northern white rhino that will ever exist.

And he's dead.
Last year he passed away, leaving northern white rhinos functionally extinct forever. Less than a decade before that another subspecies - the western black rhino - was declared extinct.
These were some of the strongest, toughest animals in the world - there was no natural flaw that triggered this. Their extinction was caused almost entirely by humans poaching for profit.We are in a crisis.And as you read this, the criminal gangs are continuing to relentlessly poach rhinos for profit, and a third subspecies - the eastern black rhino - is now down to just 850 individuals.We must prevent them from suffering the same fate.By pledging your support for rhinos, you can help to send a message to world leaders that people still care enough to stand up for these poor animals. The last 850 eastern black rhinos have a high price on their head – but you can help protect them. Pledge your support for them today.RIP Sudan - I pledge to help save the remaining rhinos in your honour.
https://www.thepetitionsite.com/takeaction/495/518/954/?z00m=32009234&redirectID=2934879614
Posted by Jon Downes at 12:06 PM