MUIRHEAD`S MYSTERIES: A hairy snake in the U.S.A and other hairy freaks

I came across these stories trawling the Net the other day for cryptozoology gems and I wasn`t disappointed!

This story is from the Evansville Courier and Press, a newspaper of Indiana on April 2nd 1891:

The Remarkable reptile seen by a sober Wisconsin man

" Snake stories grow alarmingly scarce of later years, but a correspondent of Nature`s Realm relieves the dearth somewhat by telling one  which has never been printed before but which ought to have been told just after the (Civil? - R) war.The correspondent says " In the fall of 1869 I was in La Crosse, Wis,and having some business in La Crescent, on the Minnesota side of the Mississippi I crossed the river in a ferry boat. There is,or was, an arm of the river on the Minnesota side called, in western parlance, a `slew`. Over this there is a bridge; on going over it i saw a snake coiled on a `butt`  that had been sawed off a tree of about two feet in diameter, and it was floating in the water.The snake was so different from any animal of the kind I had ever before seen that I gazed at it for fully five minutes...it was red and more extraordinary still .it was exactly like a red cow`s tail. the hair on it was fully an inch long and as thick as that growing on a cow`s tail. Having no means of capturing the snake I determined to make it show itself, and flung a piece of stick at it awoke at the splash in the water,uncoiled itself and dived into the slough it was certainly six feet long or more.."

From the Punjab as reported in the 1910 edition of Folk-Lore :" Tir mar or ghore dangan,udna,or jatal is said to be a hairy snake see Panjab Folklore Notes page 216.

This here is from the Kalamazoo Gazette of Aug 5th 1911.(Sorry about the poor editing) 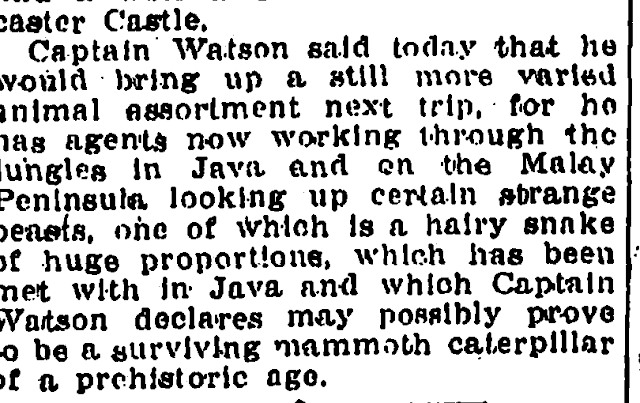 Finally, here is a blog on some hairy Patagonian snakes http://patagoniamonsters.blogspot.com/2009/12/hairy-snake.html