A word about cryptolinks: we are not responsible for the content of cryptolinks, which are merely links to outside articles that we think are interesting (sometimes for the wrong reasons), usually posted up without any comment whatsoever from me.
It's not the Loch Ness monster, but a Yellowknife angler has ignited debate of his own after landing, and then releasing, a fluorescent green pike while fishing in Great Slave Lake. 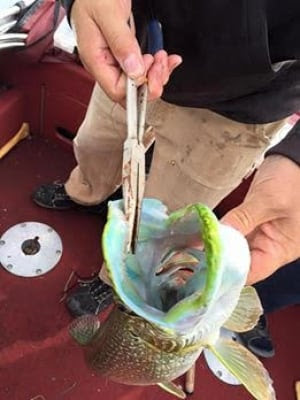 The pike's lower lip was the most discoloured part, said Straker. 'It looked like green lipstick. It was so bright.' (submitted by Craig Thomas)
"The whole top of the fish had a different green," said Randy Straker. "If you look at the mouth, it looked like green lipstick. It was so bright."
Straker was fishing with his friend Craig Thomas on Sunday in the lake's North Arm when he made the catch.
After pulling the pike into the boat — Straker estimated it at 38 to 40 inches and 12 to 14 pounds — the two men snapped a few photos and released their catch. Afterward, though, they realized that they'd caught something quite unique.
"In hindsight, after looking at the pictures, we should have taken a whole lot more," he said. "But we compared some pictures that we'd taken previously of a fish. And when you put it up against another pike, it's way lighter. The fins were kind of a translucent green as opposed to the darker colours of a regular pike. 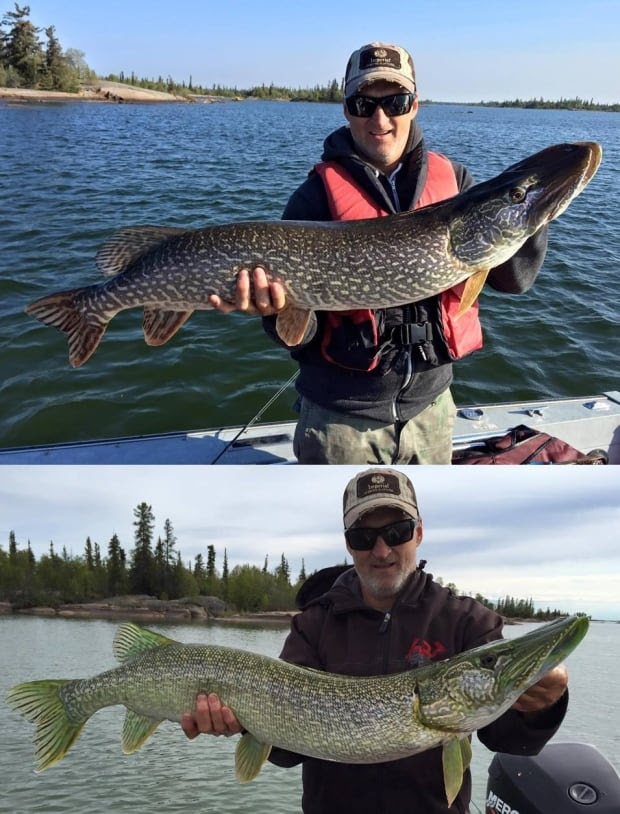 The pike's unique colouring (below) stands out next to a photo of a more traditionally coloured jackfish, like the one Straker caught earlier that day (above). (submitted by Craig Thomas)
Avid fishermen, Thomas and Straker had worked their way around the lake for the past five years, and had "just started ... exploring in that area," said Straker.
The two were finishing up their day when Straker landed the fish. Pike, also known as jackfish, are common in Great Slave Lake, but when the catch passed by the boat, both men realized something was different.
"I was wearing polarized lenses, and I thought maybe that was causing some different coloration in the fish," he said. "I was just about to pull my glasses off to take another look... and then my buddy made a comment about how strange the fish looked.
Read on...
Posted by Jon Downes at 11:24 AM