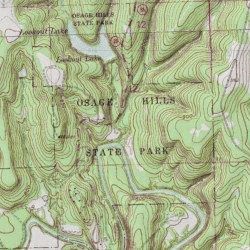 I found this story in the Lexington Herald of October 7th 1917 and wonder if anyone has any more information?

Arkansas City – A lost world, inhabited  by birds with leather wings,and teeth,and thousands of other strange and weird creatures, has been found in the Osage hills, in a wild and only partially explored section of north-western Oklahoma. The tale of the lost world was brought here by John Brune, a member of the Osage Indian tribe, who has a reputation as an explorer.The story told by Brune is as strange as that related by Sir Arthur Conan Doyle in “ The Lost World” and it has the advantage of being possible of verification. Brune,himself,is now making plans to equip a large exploring party and next spring he will go again into the Osage hills determined to brink back concrete proof of his story.

The lost world, according to Brune, is located on a plateau about a mile high, the sides of which are so steep that it is impossible to climb them unassisted. He was alone when he found the plateau and was unable to scale the precipitous cliffs.

But what convinced him that animal life on the plateau was the same as that which existed several hundred years ago was the result of a hunting trip. Brune saw a bird, of strange appearance, and he shot it. He found that it had leather wings without feathers and that its mouth was furnished with a complete set of teeth. Although he did not know that the bird answers to the name of pterdactryl (sic) in science, he did realise that it was a strange species.

So steep were the cliffs leading up to the plateau on all sides that the animals on the summit were unable to descend and the men below were so far away that they could not distinguish their characteristics except that they were different from all animals known to huntsmen.So Brune decided to return to civilization and get an outfit which would enable him and his friends to return to the Osage hills, scale the cliffs of the mysterious plateau, and see at first hand the mysteries of life existing there.

The plateau is completely isolated from surrounding country. But Brune says that with the aid of ropes and plenty of men he believes the cliffs can be scaled. Heavy rifles will be carried by the men making up the party in the expectation that they may meet with some of the great animals described in books devoted to prehistoric animal life.

Brune only talks of his experience to those who are intimate with him. He fears he will not be believed because of the strangeness of his story. But he swears he tells the truth and he is determined to prove to the most cynical that the lost world really exists. He is determined to bring back to civilization specimens of strange life,carcasses and skins. (1)