The Sykes paper: A personal view 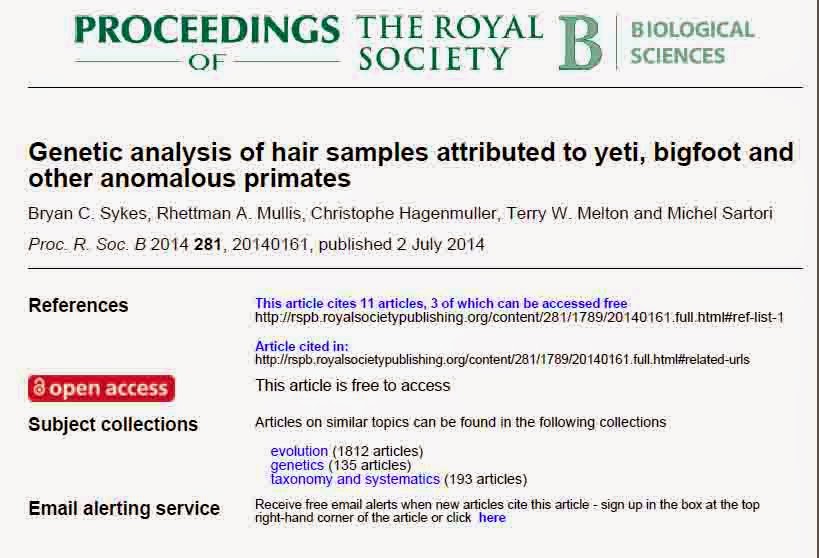 Last night I was sent a copy of Genetic analysis of hair samples attributed to yeti, bigfoot and other anomalous primates by Bryan C. Sykes, Rhettman A. Mullis, Christophe Hagenmuller, Terry W. Melton and Michel Sartori. And it was most enlightening.

There is nothing in it that anybody in the cryptozoological community could possibly object to.  At no point do Sykes and his co-authors claim (as they were quoted in the popular press some months ago) that they have hammered the last nail into the coffin of the yeti.  What they do say is: “While it is important to bear in mind that absence of evidence is not evidence of absence and this survey cannot refute the existence of anomalous primates, neither has it found any evidence in support” which is an entirely different thing.

After the television show last year it was suggested by Sykes that the unknown bear species in the could be a hybrid between the brown and polar bears.  This rang alarm bells with me, because the nearest population of polar bears is thousands of miles away, and if so where did the daddy bear come from?  However, in this paper they qualify this statement: “If they are hybrids, the Ladakh and specimens are probably descended from a different hybridization event during the early stages of species divergence between U. arctos and U. maritimus.”

Finally, the authors write:  “Rather than persisting in the view that they have been ‘rejected by science’, advocates in the cryptozoology community have more work to do in order to produce convincing evidence for anomalous primates”, I would again, agree with this totally.  And would like to say that in my opinion cryptozoology is not, and never has been, “rejected by science”.  Cryptozoological concepts have, on many occasions, been rejected by individual scientists – something of which I have had personal experience – and that is an entirely different thing.

If Sykes et al do manage an expedition into the Himayalas to look for this unknown bear species, and it should be pointed out here that at least one unknown bear species has been postulated from the region for many years (Eberhert 2002, for example) I for one am very much looking forward to reading their results and findings.
Posted by Jon Downes at 12:45 PM