GROTESQUE: Giraffe Killed At Denmark Zoo Because 'Marius' Is Surplus To Requirements 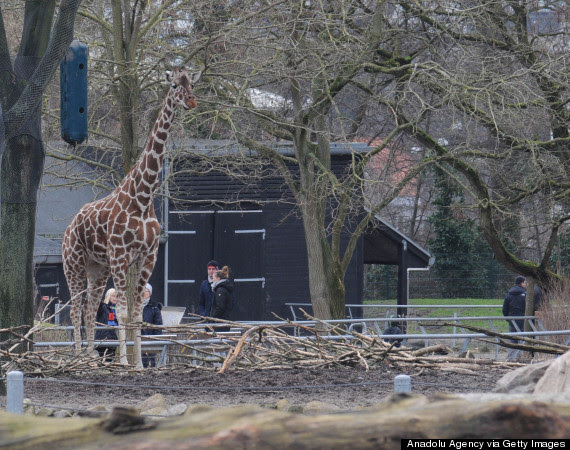 A bid to save a young giraffe from destruction at Copenhagen Zoo has failed, and the giraffe was put down on Sunday morning.
Thousands of people had signed an online petitions appealing for a change of heart over the two-year-old called Marius.
The zoo said it had no choice because of its duty to avoid in-breeding.
Marius was due to be killed by a bolt gun, not a lethal injection, which would contaminate the meat.
The carcass will partly be used for research and partly to feed carnivores at the zoo.
The UK's Yorkshire Wildlife Park - which has a state-of-the-art giraffe house and the capacity for an extra male - was among several zoos which put in a last-ditch offers to take Marius.
It said it was "saddened" by the killing of the animal.
'Good practice'

Stine Jensen, from Denmark's Organisation Against the Suffering of Animals, said the situation "should not have occurred".
Continue reading the main story

I can't believe it. We offered to save his life. Zoos need to change the way they do business”

Robert KrijuffDirector of Dutch wildlife park
"It just shows that the zoo is in fact not the ethical institution that it wants to portray itself as being, because here you have a waste product - that being Marius.
"Here we have a zoo which thinks that putting this giraffe down instead of thinking of alternatives is the best option," she said.
But Bengt Holst, scientific director at the Danish zoo, defended Marius's destruction, saying that giraffes had to be selected to ensure the best genes were passed down to ensure the animal's long-term survival.
He told the BBC it was a responsible practice on the part of zoos to manage their animal populations to ensure they remained healthy, with some 20-30 animals put down at Copenhagen Zoo in a typical year.
Read on...
Posted by Jon Downes at 2:13 PM