It`s been a while since I presented a round-up of progress on  the CFZ`s research into mystery animals in  Hong Kong. These are stories for the  Mystery Animals of Hong Kong book Jon and I are preparing. Here is a short selection of old newspaper stories and other gleanings from the Net that I hope will whet your appetite. I could launch into dozens of stories and I believe I have hardly scratched the surface of websites in languages other than English. Especially Chinese of course. [I use Google Translate-R]

I stumbled across a web site consisting of an e-mail from the national library of Japan to myself in 2011. I think it was listing all the bibliographical research they had done  (and there were very many titles)  to find Japanese references to the Hong Kong Stanley Prison Camp tiger of 1942 and I was pretty incredulous to find none at all. But that`s life, as someone once said. I had only previously had a Japanese-language version of this e-mail. More on Japan below.

But in chronological order, here we go:

The first of these stories comes from The Roanore Times, an American paper of June 6th 1893, as follows:

Something strange lately affected the fish in Hong Kong waters. For many days they were in a state of stupor, and allowed themselves to be caught by hand, making no effort to escape.

The second is almost the exact opposite; hyper-active fish,as reported on the Hong Kong Horror Network website [ http://horrorhk.blogspot.co.uk/2013/07/blog-post.html ] on July 9th 2013:

'Wan fish accounted appear tomorrow in Hong Kong after a good strange visions lead to panic.' This told the story of fish jumping frantically out of the water in various parts of Hong Kong, including Aberdeen and Lamma Island. Apparently fire fighters had to shovel the fish into bins there were so many of them. This lead to rumours of  an impending disaster such as an earthquake or tsunami. On May 17th 1999 at Sok Kwu Wan something similar happened. One speculation was lack of oxygen in the sea. [Or seismic activity- R]

Parrots are not generally supposed to range so far north as Hong Kong, but we learn that a couple have recently been shot in the Colony, one on the Island and the other in the New Territory [sic]. The shooting of a single specimen could of course be put down to an escape, but it is hardly possible that two escaped birds of the same species should be met with in one season and at a considerable distance from the town.

[Now this is interesting because I thought parrots were supposed to have escaped from somewhere during Japan`s occupation of Hong Kong; 1941-45. So what have we here? – R]

Gwulo.com reported in 2013 that in the 1960s or `70s a black panther was reported in Hong Kong. Confusingly, the militant black American civil rights group the Black Panthers had some connection with Hong Kong at this time! Confusingly, when using Google Images and you`re looking for a cryptid black cat, I mean. 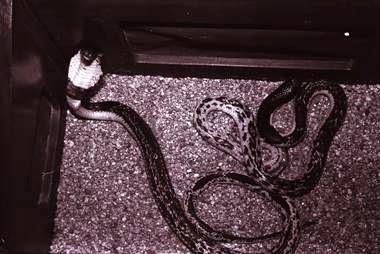 This photo is taken from the Romer archives at the Zoological Society of London, showing a specked-coloured cobra in Hong Kong, c.1970s.

Posted by Graham Inglis at 3:11 PM

From "Hong kong birds" (1954 edition) by G.A.C.Herklots - for Rose-ringed Parakeet he says "My view is that the birds in Hong Kong are descendants of birds released from captivity in the colony some time in the decade 1903 to 1913..."

It was Yellow-crested Cockatoos which were released in HK in 1941 at the time of the Japanese occupation..