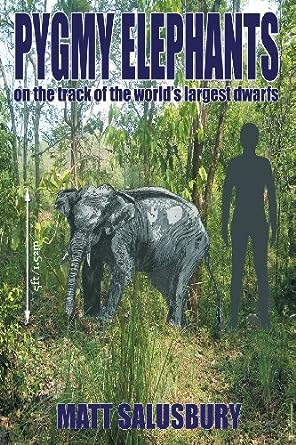 I am very proud of the books that we produce through the CFZ Publishing Group. But I am particularly proud of this latest volume: Matt Salusbury's peerless book about Pygmy Elephants.

If ever there was a contender for 'giant dwarfs' or 'the world's biggest dwarf', pygmy elephants are it. Even a five-foot at the shoulder pygmy elephant would still be a massive beast. I wanted to call this work Slightly Smaller Elephants - Possibly but I was persuaded that Pygmy Elephants had a better ring to it.

There have in the past - millions to hundreds of thousands of years ago - been smaller species of elephants, well-documented in the fossil record, some of whom we will meet shortly. And there have been claims made for the existence of living pygmy elephants in various remote and not-so-remote parts of the world today.

This is THE natural mystery tour! If you enjoy thrillers or natural history, then this is for you. If you enjoy both, then you're getting even greater value.
Put natural history, mystery and a tour of some of the world's most remote habitats together and this is the result. Yes, it is greater than the sum of the parts and no, it's never dry.
Matt Salusbury may not (yet) have the television reputation of the great Sir David Attenborough, but this particular zoo quest (American readers: ask your great grandparents in the UK to explain the reference) is a joy. His mixture of personal and academic styles, his journalistic quizzing of researchers more accustomed to facing the jungles of Africa than the jungle of the media brings delightful elucidation and sheds a refreshing (if not entirely complimentary) light on laboratory life and scientific ecology in the 21st century.
What could, in other hands, have been a dry text condemned to sit alongside bones on laboratory shelves, gathering dust but little interest, has been transformed into what at one point reminded me of a school nature trail for seven-year-olds, but on a truly continental scale.
Expect the unexpected. This is a howdunnit, a wheredunnit and an ecological who-hid-it. As for the ending? That's a natural mystery too - until the reader gets there. But the style and substance mean that such progress might not take as long as you had thought (but sleep or other tasks may be delayed).
It's a giant tale about a small creature. Taking the skin of this pachyderm and dissecting what's inside may be too crude a metaphor for some, but the result is an exploration of innards that would have fascinated a Roman soothsayer and intrigued this 21st-century vegetarian.
Hit click - and start this track for yourself now. It's a journey well worth following.