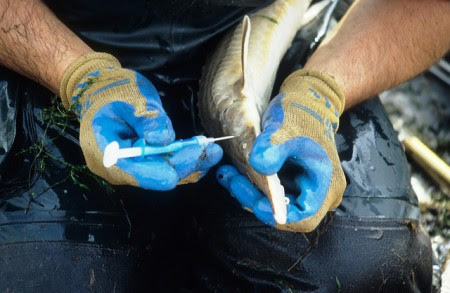 An 8-foot long monster sturgeon fish was discovered dead in Lake Washington this Saturday. Keith Magnuson, a Seattle resident who discovered it, and presumed  the primitive-looking fish to be a shark.
A sturgeon “is not a common fish to find in the lake,” Annette Hoffman, a fish and wildlife biologist from Mill Creek, explained.  A sturgeon found in the year 1987 was around 11 feet long and weighed approximately 640 pounds.
According to Hoffman, sturgeons are basically deep water feeders, and they usually migrate up and down the Columbia River.
“For years there had been monster sightings, like Loch Ness-type stuff,” Magnuson added.  “And finally a dead sturgeon came to the top and it was surmised to be the monster.”
Soon enough, a team of biologists along with the Washington State Department of Fish and Wildlife took DNA samples of the sturgeon.
Brad James, an expert on prehistoric looking fish and a biologist at the Fish and Wildlife in Vancouver, speculated that the sturgeon might have entered into the lake through the Ballard Locks, and could have been there, feeding for years.