THIS CHRISTMAS FROM CFZ PUBLISHING GROUP: Wildman! by Nick Redfern 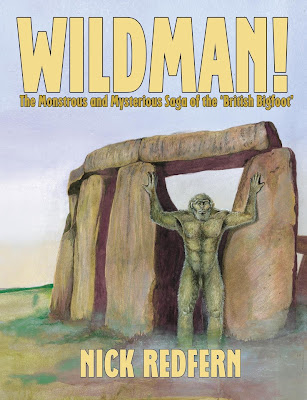 In Search of a British Man-Beast: The huge forests of the United States are home to Sasquatch. The Abominable Snowman roams the Himalayas. Australia has a similar beast, the Yowie. In China there lurks a giant, bipedal creature called the Yeren. From the Caucasus Mountains in Eurasia stories of the Almas circulate. And then there’s the highly controversial matter of Bigfoot in Britain.

A Menagerie of Monsters: For years, Nick Redfern has been on the trail of this mystifying monster of the British kind – one that provokes fear, amazement and controversy whenever it rears its horrific, hairy head. The Shug-Monkey, the Beast of Bolam, the Big Grey Man, the Man-Monkey, and the Wild Man of Orford are just a few of its many names.

The Strangest Sasquatch of All: But, the wild men and Bigfoot-style beasts of Britain are not what many might assume them to be. They’re not just strange. They’re beyond strange. In Wildman, Nick Redfern presents controversial data that places the British man-beast in a definitively paranormal category.

A Supernatural Monster: Lycanthrope-style shape-shifting, occult rituals, the human dead returned in beastly form, animal sacrifice, thought-forms and monsters of the mind given a semblance of life, UFO activity, and amazing encounters at sacred, historic and ancient sites all across the British Isles, are just some of the many issues covered in Wildman, the first, full-length study of a bizarre and nightmarish phenomenon of appropriately monstrous proportions.
Posted by Jon Downes at 1:18 PM