ADELE MORSE IS A FOXY LADY

My name is Adele Morse and I am an artist and taxidermist. I currently live in London  I have been making work for the past year about the mysterious Sumatran Orang-pendek, an unknown species of ape. I am going on an expedition to the jungle for two weeks in 2013 and have been getting all my jabs and equipment. I found a taxidermy fox i made a year ago when i was doing my Masters at the Royal Academy Schools in a box. I almost threw it away but decided when i saw that sweet little face to sell him on ebay.
http://www.ebay.co.uk/itm/Unusual-Fox-Taxidermy-anthropomorphic-stuffed-Red-fox-/190734913735
I got lots of interest and messages about the fox. It sold for way above my estimate for £330!
I then contacted the buyer who wanted to pick the fox up in person. He lived in manchester but would be coming to london to collect the fox. we got talking via email to arrange delivery and he told me why he had bought it.  DJ space dimension controller had posted a link to the listing on his facebook page. offering to play at the party of the person who buys him the fox.  Mike who bought the fox is a huge fan and is planning to get the DJ to play in his house.
All quiet for a week or so.

Then from nowhere i start getting numerous emails from Russians, both to my eBay account and personal email. telling me they love the fox. or want one. or want that one.
A blogger got in touch from Russia and asked to interview me regarding the fox.
He tells me that the fox has become a celebrity in Russia. thousands of images of the fox photoshopped have invaded all social networking sites , meme sites and had won over many people. I posted a link from my blog to the blog article.....
http://translate.google.com/translate?hl=en&sl=ru&tl=en&u=http%3A%2F%2Fal-stager.livejournal.com%2F99532.html 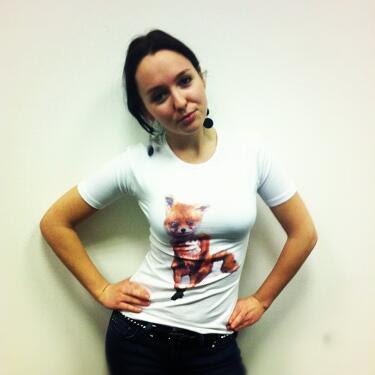 A couple of days later the Moscow version of the Metro newspaper wanted to interview me and put an end to the myths of the fox. I did a skype interview with the journalist. he later send me a PDF of the paper. Its not a photo of me. He took a photo on my blog thinking it was me and published it. It was in fact a photo of a girl from the blog above wearing a fox tshirt.
The plot thickens. this girl turns out to be Anna Veduta, the press officer of Russian politician Alexei Navalny
a post about this below....
http://translate.googleusercontent.com/translate_c?depth=1&hl=en&rurl=translate.google.com&sl=ru&tl=en&twu=1&u=http://rhunwolf.livejournal.com/519709.html&usg=ALkJrhjn4hJyLu-9eihwBS9veDg_oUaeWw
I am now making two more foxes as the demand has been so high. Prior to this happening my blog had maybe 10 hits a day. It has had 10,000 hits each day from all over the planet. Its been getting crazier as the days go by.
http://www.netlore.ru/uporoty-lis
here are links to my personal blog where you can see more about this and some fox pictures. And below that is Google results for the fox in russian. translated.
www.adelemorse.co.uk
https://www.google.co.uk/search?q=%D1%83%D0%BF%D0%BE%D1%80%D0%BE%D1%82%D0%B0%D1%8F+%D0%BB%D0%B8%D1%81%D0%B8%D1%86%D0%B0&sugexp=chrome,mod%3D18&um=1&ie=UTF-8&hl=en&tbm=isch&source=og&sa=N&tab=wi&ei=pwK8UMOzOPKr0AXlzoHgDw&biw=1166&bih=851&sei=3QK8UOHAI_GX0QXMgYGwBQ
http://petersburg.gs/novosti-sankt-peterburga/13478-uporotaya-lisa-chto-eto-takoe-i-otkuda-prishel-etot-mem--mr7ru.html
Posted by Jon Downes at 1:20 PM