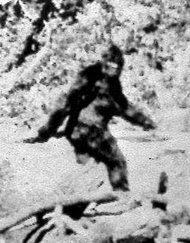 What is with these small-minded state bureaucrats? The founder of the Chautauqua Lake Bigfoot Expo in the western corner of the state – the heart of New York’s Bigfoot country — asked the Department of Environmental Conservation to ban the hunting of the furry hominid.
But despite the species’ obvious status as endangered – not to mention the impact on the upstate economy if New York’s Bigfeet were to be hunted to extinction — the state declined to act, reports Capitol Tonight NY.
“No program or action in relation to mythical animals is warranted,” the department’s chief wildlife biologist, Gordon Batcheller, wrote to the citizen, Peter Wiemer of Maywood.

Mr. Batcheller’s missive would seem to put to rest, at least from the state’s point of view, Mr. Wiemer’s claim that because Bigfoot is not on New York’s official list of animals that may be hunted, it is automatically protected.