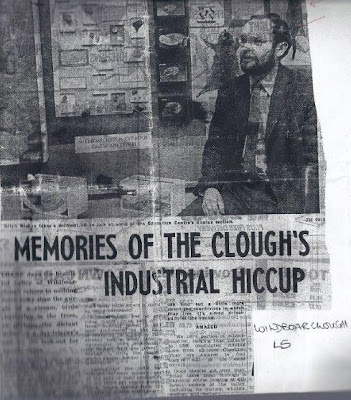 I have recently uncovered a number of mystery-cat stories from Cheshire, which is the county I live in. Whilst looking through some newspaper cuttings in the Macclesfield Library I found this cutting, which shows a man sitting at a desk (his name is Brian Beeken; unfortunately I haven`t been able to track him down) sitting next to a display with a sign saying: `Wildboarclough Outdoor Education Centre`. The article came from the now defunct Wilmslow Advertiser of March 11th 1976. It appears to show, if you look closely in the top right-hand corner, two wild-cat skins of unknown provenance.

I was told by a local Womens Institute member of a black cat in a cage being released near Wildboarclough about 25 years ago. Also, only today (June 20th) I was told of a probable lynx hunting rabbits in Tegg`s Nose, a wild area of rocky outcrops and valleys just outside Macclesfield. This was also around 1987. The animal had the tufted ears of a lynx.

In the early 1990s a couple of large feral cats were reported in Bosley Woods near Macclesfield in E. Cheshire by an acquaintance. They were the siz 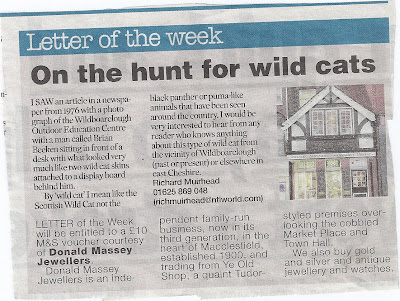 I contacted Carl Marshall because I wanted to know about ageing and wild cat skins and he told me: “Insects, such as moths and also damp are devastating to the preserved fur on a pelt - but in the absence of these, a dried out skin just hung up (even without a case) and left alone on a wall indoors could last a thousand years, maybe more as it is effectively mummified. But it must remain dry.

"Sunlight will bleach out colours and distort patterns, but it wont really effect the actual structure of the hairs themselves.” (1)

But this information, although interesting, didn`t answer my question as to where the skins had come from and when so I wrote to the Macclesfield Express asking readers if they knew of any stories of wild cats near Wildboarclough, and in mid-May my letter was published (see the accompanying image) and it won the star letter of the week, winning me £10, which I spent on a decent lunch, for once! But I received no news from that line of enquiry.

So I went to the County Archives in Chester. I found in a log called the “Game and Fishing Book” a mention of one cat shot on November 13th 1847 by a game keeper at Tabley, on the Leicester-Warren family estate. I also found a cutting from the Cheshire Observer dated November 18th 1882 concerning a meeting of the Neston and District Literary Society at which the Rev J. Towert gave a talk on “ Edward the Naturalist” who “once emerged bleeding and torn from a struggle with a wild cat, but delighted with the capture of a fine specimen, which only succumbed on receiving a large dose of chloroform.” Neston is in the far west of Cheshire on that part of the Wirral that lies within Cheshire.

T.A. Coward in his `Invertebrate Fauna of Cheshire and Liverpool Bay” vol 1 1910 includes a wild cat trapped some years before 1883 as mentioned by “the late J.F. Robinson “ (Manchester City News 3/11/1883) in Delamere Forest. (Although Coward doubted this was a bona fide wild cat.) The article said:

THE WILD CAT IN THE NORTHERN COUNTIES


Is the Wild Cat still to be found in the northern counties? I ask this question merely to elicit information, because many domestic cats , being poachers from natural instinct, often become wild, especially in districts where game is abundant. These by game keepers are called wild cats. I nave seen many domestic animals nailed behind the barn-door, and denounced as veritable wild cats, whereas nothing could be more erroneous. The last true wild cat, and I believe the only one I have handled, I set up for the late Mr John Hayes. It was caught in a trap, somewhere in the neighbourhood of Oakmere [a village next to Delamere-R] It had a lean and lanky, as well as a powerful and ferocious appearance, with a coat not unlike a tabby cat. The tail was tufted at the end like a fox`s brush, with dark hairs, and was considerably shorter than the tame species. The latter tapers to a point. Still I would not found any specific character solely upon the tail, for these vary so much, as is well known, in crosses with the Manx cat…I doubt very much if the tame animal is identical with the wild cat, though I have heard this asserted frequently by those who never saw a wild cat. It may possibly still be in existence in some of the wild portions of the northern counties, but some intelligent gamekeepers declare it is now extinct in one of its last shelters, Delamere Forest JAMES F. ROBINSON. (2)