The hen harrier (Circus cyaneus) is listed by the RSPB as a high conservation priority, especially in view of the fact that gamekeepers have been known to target this bird, which has a liking for grouse.  Thus, its dietary preferences are threatening its survival in some parts of the UK.  It is believed that there are only four breeding pairs in England.  One roosted at the RSPB nature reserve at Fowlmere in Cambridgeshire between mid-December last year and early April, but is believed to now have flown north.  Reserve warden Doug Radford said: “We don’t see them every year. This is an exceptional event. We have never had one roosting for this length of time on the reserve.”
Pic:  Wikipedia
http://www.herts24.co.uk/news/rare_bird_swoops_into_fowlmere_1_1342697
http://www.rspb.org.uk/reserves/guide/f/fowlmere/index.aspx 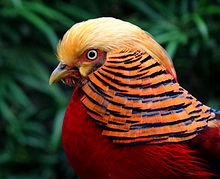 There are only 100 breeding pairs of the rare golden pheasant (Chrysolophus pictus) breeding in the country, and the single bird spotted on a shed roof in Walton sparked fears that it may be an escapee from a private collection.  The resident who spotted the bird reported the sighting to the county and borough councils. “It was there for 4-5 minutes before flying away in a southerly direction. I’ve contacted rarebirdlalert.co.uk and the official Staffordshire bird recorder.

“They feel the bird may have escaped from a private collector since wild pairs are only found in Norfolk, north Wales and Dorset. I’ve been informed that the borough council runs Stonefield Park, which has birds of this sort. Have they got a bird missing?”

However, it turned out that Stonefield Park had suffered no escapes.  The mystery remains.
Pic: Wikipedia
http://alittlebitofstone.com/2012/04/10/rare-bird-on-the-wing-in-walton/ 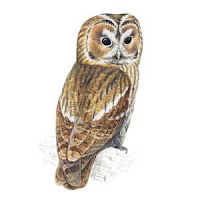 Following a Scottish SPCA investigation, a Kirriemuir gamekeeper has been found guilty of illegally trapping a tawny owl (Strix aluco) in a crow cage, contrary to the Wildlife and Countryside Act 1981. The bird suffered an injury to its beak and – as the trap contained no food or water – was extremely thin.


Scottish SPCA Chief Superintendent Mike Flynn said, "Cage traps are widely misused, either through poor management or ignorance. The trap which Christie was responsible for failed to meet the legal requirements of the Scottish Government's General Licence, which states that traps must bear identifications tags and be immobilised when not in use.

"Christie pled ignorance to such conditions, which is shocking given he was an experienced gamekeeper. We welcome the fact that Christie now has a criminal conviction for this offence. Thankfully the tawny owl received immediate vet treatment before being rehabilitated at our Wildlife Rescue Centre and successfully released back into the wild."

The traps are commonly used to control carrion crows in order to protect livestock and fruit and vegetable crops.  However, like snaring, these traps are indiscriminate and non-target species are often caught and injured.  Pic:  RSPB
http://www.wildlifeextra.com/go/news/cage-trap-owl.html

that had been left for dead after being shot – x-rays showed gunshot in each of its wings and one of its legs.  A healing fracture of its left humerus bone showed that it had been shot around three weeks before being found, so had been scavenging what it could.  Despite this bird being left to starve, it recovered and has now been released back into the wild, despite fears that it would never be able to fly again.  Retired dale vet, Neville Turner, nursed the bird and once it had built up its strength it was handed to Pat Kingsnorth, who runs Ark on the Edge animal sanctuary near the village of Woodland.

Ms Kingsnorth said: “We kept her in our aviary, where we have barn owls and kestrels.
“When she came to us just before Christmas, she was in need of building up her strength, especially in her wings – but by the time we let her go she was ready for it.”

“She was flying the full length of the aviary and while it’s sad in a way, it’s wonderful to see her go,” said Ms Kingsnorth.

The marsh harrier is the largest of the harrier and also one of the most rare. Ms Kingsnorth said she is appalled that someone had shot one.

She said: “I think it’s disgusting. A lot of people don’t want birds of prey and they just want rid of them, whether that’s poisoning them or shooting them.

“I think it’s a very sad state of affairs. We interfere with nature far too much.”
Pic: www.wildlifeextra.com
http://www.teesdalemercury.co.uk/teesdale-news/story,4050.html
http://www.arkontheedge.org.uk/