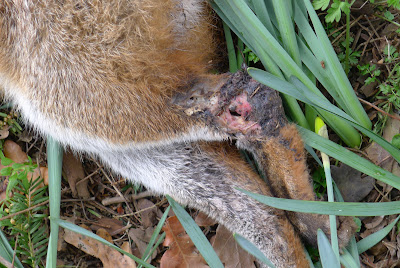 Whilst out walking the hounds yesterday I happened across this unfortunate fox lying dead in the local graveyard (appropriate?). I had my camera with me as usual and took the three photographs above. I am sending them to you with the following comments and observations. 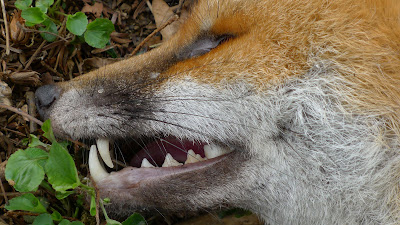 * The full length photograph merely depicts the size, colour and position of the animal.
* Then I noticed the injury on the hind leg, which I took a close-up of. What caused this? Surely it is not a shotgun would? Maybe another fox? A dog? Something bigger? I am no expert but could such an 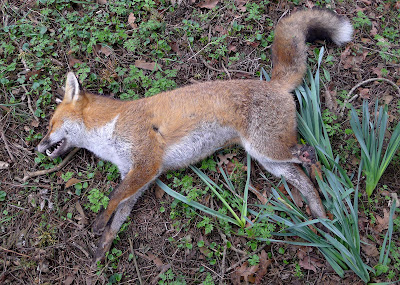 injury alone have killed the animal? I did not tip it over to look for other injuries but there seemed to be none. Maybe it died of a heart attack through fright.
* A bigger animal (if it killed it for a meal) would have surely eaten some of it.

The other one of the close-up of the teeth was taken for record purposes – but why? I was fascinated and not a little astonished to see what good condition the teeth were in; hardly yellowed at all. Now, my domestic quadrupeds have yellower teeth than that and we occasionally clean them with doggy toothpaste. I wonder how the foxes keep theirs so clean? Anyway – it is just an observation.

I feel for the poor animal – I do love foxes despite all the hullabaloo about the destruction they are meant to cause. They were here first…

Love from the Topographic Oceans.

P.S. Actually, I just noticed a huge puncture mark on the fox – just above its left foreleg – and another towards the middle of its body. No blood, though – can’t be a shotgun.

Foxes keep their teeth clean by eating the bones and meat of their prey, and then there is the simple fact that foxes don't live long enough in the wild to get their nasty.

A stray lurcher might have killed this fox. Dogs usually won't eat a fox if they kill-- that's been my experience-- but a leopard or puma/cougar, which often do live on dogs, jackals, and coyotes, would have eaten the fox.

From the big debacle raging about feeding domesticated dogs on raw foods versus kibble from the store, I've run across several mentions of the health benefits.(Not to debate it here, but as a pointer.)

One of them is that a dog's teeth stay unyellowed for much longer and the entire mouth (and body of course) remains healthier. I suppose it would be good to find out if young, prime canids from other related species (wolves for instance) have similar dental health when in the wild. If so then it says a lot for what they're eating as to why their teeth stay healthy.

And again, it could well be a young fox who has fairly good dental health regardless. The wound on the back leg almost looks like it may have been snared in some way. We had a cat years ago who, after a tornado warning, we found the next morning trapped between two of our wooden fence posts by the back leg. It looked much like that for some time as it healed, only quite noticeably swollen too. The puncture wounds may not be from a shotgun, but from a smaller-bore type of firearm? You'd think a Texan would know more about guns, hm!

It does look like this fox has been in a snare; There appears to be a definable ring that looks like it may have been caused by a snare and then pulled against by the agonized fox, But how it escaped with out chewing, as there is no apparent damage to the teeth is anybody's guess. Usually modern snares are fully locking.

Considering the lack of blood, I think the puncture mark may just be how the hairs were growing on this particular animal and remember the hairs are quite thin on this area anyway and longer on the back, my spaniels hair also grows in this manner on his flanks.

Maybe its killer (possibly a gamekeeper) removed it from the snare and threw the dead fox where you found it! but then again it doesn't look emaciated and why would a gamekeeper throw it into a public graveyard? looking at it like this I think its far more likely it got to that spot on its own.

It is obviously a young animal evident by its teeth, it looks to be a female going mainly by its apparent size. Even though it has a black tip (this feature does not always suggest sexual dimorphism)- my father was a taxidermist for 40 odd years and we have had many dog foxes with white tail tips in our possession for a while.

So this probably doesn't help all that much, more questions than answers.

However there's one thing we can be sure about - Its dead!!

I hope you enjoyed today at the farm, isn't the Queensland Birdwing
fantastic?

oh and did you notice the other hind leg on the fox also looks quite odd? It looks swollen showing no identifiable joints.
Maybe it was hit by a car or experienced another similar trauma on the other side of the body out of sight?