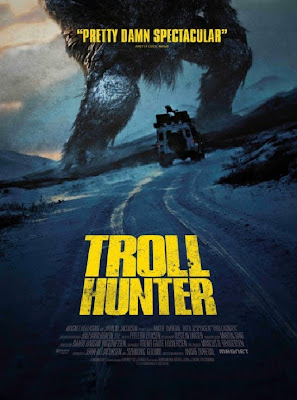 I first heard about Trollhunter when I saw a poster showing a defender being dwarfed by a pair of legs (a troll’s I presumed). Seeing this, and the trailer soon after, I decided to give the film a chance thinking that it might be an enjoyable distraction for an hour or so. I am glad I did as this Norwegian offering is a breath of fresh air in a somewhat stale monster movie genre.

As with most horror/monster movies, the plot is fairly straight forward. Three student filmmakers, creating a documentary about bear killings, take an interest in a mysterious hunter and begin to follow him. Despite warnings to leave him alone, the three investigators continue to stalk the hunter until they see him leave in the middle of the night. Thinking he is going out to poach, they follow him but discover their initial thoughts were both right and wrong. He is going out to hunt, but not bears; he’s out hunting (surprise-surprise) trolls.

The film has taken the shaky, hand held camera, point of view option (used in The Last Broadcast, The Blair Witch Project and [REC] to name a few) to try and add an element of authenticity to the film as well as make you feel like you are in the middle of the action too. This doesn’t detract from the film at all; in fact, I thought that it added another element to it. The first encounter with a troll occurs at night, in the woods, and the green tinge of the night vision on the camera captures how I think such an encounter would - you are able to make out the major shapes (for example, a troll) fairly well while the little details are left to your imagination. The film seems to take a while to get going, but once it does, it moves along well and you do feel like you are only glimpsing a fraction of what has been going on. The film is spoken entirely in Norwegian with English subtitles but you are able to easily read what is being said while watching the cast either hunting for or running away from trolls (whichever takes their fancy at the time).

The film borrows a lot from Norwegian fairy tales about trolls and recreates it on the big screen. For example, while attempting to lure a troll out to take a blood sample, the Trollhunter recreates the Three Billy Goats Gruff fairy tale (with varying degrees of success)! Troll folklore is also discussed as the filmmakers begin to come to terms with realisation that trolls actually exist. While all this is going on, you also get stunning shots of Norway’s amazing landscape.
Trollhunter is a brilliant movie with a unique take on a mythical subject. Although it does not have the smooth finish that comes with something mass produced from Hollywood, it mixes action and comedy well and you can’t help but enjoy this film.