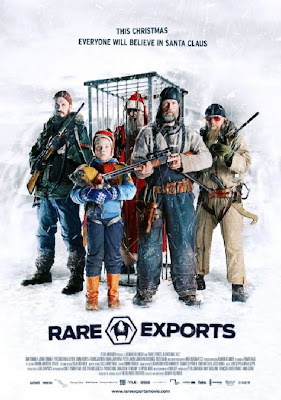 I first saw a trailer for Rare Exports just before Christmas last year, and to be honest, didn’t think much of it. Although it sounded interesting, the very clichéd American voice over makes you think this is going to be Z movie material and hardly worth watching. However, being a glutton for punishment (and there being nothing else to do) I went and saw it. All my preconceived notions about the trailer disappeared; this is a gem of a Christmas movie!

Just before Christmas, and shortly after a mysterious excavation on a Finnish mountain, mysterious occurrences start happening to a small reindeer farming community. Although the adults are convinced a predator is loose, Pietari Kontio (son of one of the reindeer farmers and hero of the film) starts to piece the events together and comes up with one disturbing conclusion: Santa Claus is real, and far from the friendly fat man everyone thinks he is.

As you can see from the trailer and poster, the film is very much in B movie territory but that does not make it any less enjoyable. Full of black humour (typical of the Finish so I am told), the film starts up and continues at a fair ole pace as you watch Pietari first come to his conclusions that Santa Claus is real and then try to convince every one of his findings.

One of the best aspects of the film is that it keeps your interest throughout as you are never quite sure of what is coming next. (This works well throughout the film to the point where I didn’t know what was going to happen at the end.) The film is not all comedy and horror (or horror and comedy if you see it that way) as throughout everything that is going on, a sensitive father-son relationship/boy coming of age theme is also apparent and quite endearing so that you cannot help but like the characters. Although the acting and story are a bit thin in places, you don’t really care as the director is able to blend comedy, tension and mild horror very well into one enjoyable film. Rare Exports is spoken entirely in Finnish with English subtitles and, like Trollhunter, reading the subtitles doesn’t detract from what is happening on the screen at all.

In a sea of happy Christmassy movies, Rare Exports stands apart by doing something different.

But, it is no less endearing and should become one of those Christmas Classics that is watched every year!

Watch the trailer here!
7/10
And Merry Christmas Everyone!
Posted by Jon Downes at 7:51 PM