Richard's new book is published today and we are distributing a leaflet at The Unconvention with a special offer. However, for those of you who still wish to take advantage of our almost obscene generosity, and who are not going to Uncon, just double click on the image of the leaflet, print it off, and Lo and Behold, you can get your discounted, autographed copy.... 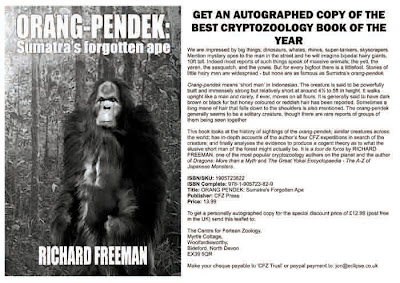 GET AN AUTOGRAPHED COPY OF THE BEST CRYPTOZOOLOGY BOOK OF THE YEAR
We are impressed by big things; dinosaurs, whales, rhinos, super-tankers, skyscrapers. Mention mystery apes to the man in the street and he will imagine bipedal hairy giants, 10ft tall. Indeed most reports of such things speak of massive animals; the yeti, the yeren, the sasquatch, and the yowie. But for every bigfoot there is a littlefoot. Stories of little hairy men are widespread - but none are as famous as Sumatra’s orang-pendek.

Orang-pendek means ‘short man’ in Indonesian. The creature is said to be powerfully built and immensely strong but relatively short at around 4½ to 5ft in height. It walks upright like a man and rarely, if ever, moves on all fours. It is generally said to have dark brown or black fur but honey coloured or reddish hair has been reported. Sometimes a long mane of hair that falls down to the shoulders is also mentioned. The orang-pendek generally seems to be a solitary creature, though there are rare reports of groups of them being seen together.

This book looks at the history of sightings of the orang-pendek; similar creatures across the world; has in-depth accounts of the author’s four CFZ expeditions in search of the creature; and finally analyses the evidence to produce a cogent theory as to what the elusive short man of the forest might actually be. It is a tour de force by RICHARD FREEMAN, one of the most popular cryptozoology authors on the planet and the author of Dragons: More than a Myth and The Great Yokai Encyclopaedia - The A-Z of Japanese Monsters.

To get a personally autographed copy for the special discount price of £12.99 (post free in the UK) send this leaflet to:

Make your cheque payable to ‘CFZ Trust’ or paypal payment to: jon@eclipse.co.uk
Posted by Jon Downes at 10:10 AM