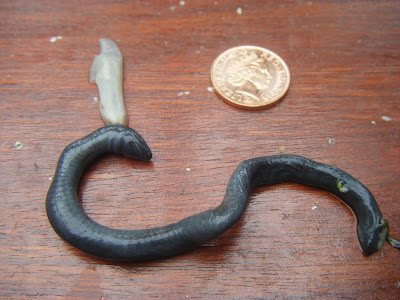 As regular readers might know, one of my duties at the CFZ is looking after our menagerie of animals. For the most part this includes my morning rounds when I check on the animals and give them their morning feeds, or daily feeds should they only require fresh food to be administered to them once a day. Typically this takes somewhere between one and two hours each day depending on just how much attention the more intelligent animals like the rabbits and the pheasant want, and the health of the animals. I’m aided in this endeavour by my assistant Helios Seven, who, like most cats, believes that if she doesn’t remind me constantly I may forget to feed her for the first time ever in the five or so years I’ve known her.

Anyway, while I was checking on the caecilian tank on Saturday I noticed something unusual lying motionless atop the gravel.

On closer inspection it was not a worm. It was a baby caecilian with its yolk sack still attached. Sadly, the creature was dead; probably a still birth. This is a great shame as the gestation period for Typhlonectes natans is long, typically taking over 270 days, and in the four years that we have had them this is the first time they have successfully bred. When checking the tank I could not find any evidence of more babies but as this species usually give birth to between two and six young, I am hopeful that they will give birth to more young and that they will not be stillborn.

Even if the caecilians do not give birth to any more young this time then at least the stillborn caecilian proves that they are finally breeding. This means that in the future there should be more baby caecilians popping up in our tank, which, as they are so rare in the UK, can only be a good thing.
Posted by Jon Downes at 12:48 PM