MICHAEL NEWTON: "Another One That Got Away" 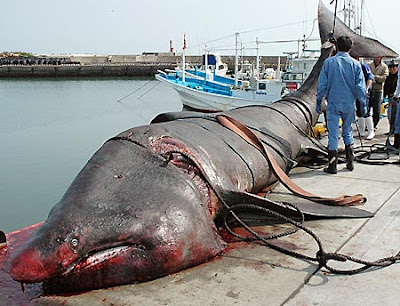 1. A basking shark caught by Japanese fishermen in 2007.
2. The author with a modern mini-globster.
3. A sketch of the 1885 New River Inlet carcass.

Globsters are mysterious by definition. They appear as if by magic, washed up on a beach to startle fishermen and swimmers, then often vanish with the tide as suddenly as they arrived. In modern times the smallest sample of their flesh may serve to prove identity before the rotting hulk is swept away and lost. It was not always so. Dr J.B. Holder, a chronicler of Florida history, introduced readers of Century Magazine to our next globster in June 1892. According to his article—

In the spring of 1885 the Rev. Mr. Gordon of Milwaukee, President of the United States Humane Society, chanced to visit, in the course of his duties, a remote and obscure portion of the Atlantic shores of Florida.

While lying at anchor in the New

River Inlet the flukes of the anchor became foul with what proved to be a carcass of considerable length. Mr. Gordon quickly observed that it was a vertebrate, and at first thought it was probably a cetacean. But, on examination, it was seen to have features more suggestive of saurians. Its total length was forty-two feet. Its girth was six. The head was absent; two flippers, or fore-limbs, were noticed, and a somewhat slender neck, which measured six feet in length. The carcass was in a state of decomposition; the abdomen was open, and the intestines protruded.

The striking slenderness of the thorax as compared to the great length of the body and tail very naturally suggested to Mr. Gordon, whose reading served him well, the form of some of the great saurians whose bones have so frequently been found in several locations along the Atlantic coast. No cetacean known to science has such a slender body and such a well-marked and slender neck....Appreciating the great importance of securing the entire carcase, Mr. Gordon had it hauled above the high-water mark, and took all possible precautions to preserve the bones until they could be removed....He counted without the possible treacherous hurricane; the waters of the “still-vexed Bermoothes,” envious of their own, recalled the strange waif.1

Before proceeding, we must note one error in Dr. Holder’s report—to wit, his reference to events occurring in spring 1885. That year’s hurricane season featured eight storms between 7 August and 13 October, with the first to pass Florida’s Atlantic coast occurring on 21 September. Another struck Florida’s eastern coast on 10 October. Clearly, neither date qualifies as “spring.”2

The location of the globster’s discovery is also problematic. The only New River Inlet recognized by name in modern America is found on North Carolina’s Onslow Bay, feeding the Atlantic Ocean after a meandering trip through the U.S. Marine Corps base at Camp Lejeune. Florida, however, does have two New Rivers: one rises from the Everglades and flows eastward through Fort Lauderdale, in Broward County, to reach the sea at Port Everglades; the other is a tributary of northern Florida's Santa Fe River, serving as the borderline between Bradford and Union Counties. Since the latter does not reach the ocean, we may safely discount it as Dr. Holder's New River.3

What was the beast described by Dr. Holder, seven years after its brief appearance and four years prior to the arrival of Florida's most famous globster off St. Augustine in 1896? Bernard Heuvelmans considered the question almost a century later, in his classic work on sea-serpents, and dismissed basking sharks (Cetorhinus maximus) on the theory that Florida’s waters are too warm, but noted historical strandings of whale sharks along the state’s coast, finally casting his vote for an unidentified “large selachian.”4

That judgment was hasty, however, since basking sharks have indeed been seen in Florida waters. Most recently, a large specimen was videotaped while shadowing a kayaker off Panama City, in March 2011 (see the video at http://www.youtube.com/watch?v=6POpa3r_KA8). The first basking shark ever documented from the Gulf of Mexico was caught off Grassy Point, on the coast of Sarasota County, on 2 April 1969. It was an adult female twenty-seven feet long, classified as "very thin" for its length, although it tipped the scales at 4,356 pounds. A second specimen, this one a juvenile female, was netted off St. Augustine ten months later, on 24 February 1970. It measured 11 feet 8 inches long.5 Yet another basking shark was observed near Cape Canaveral, Florida, on 25 January 1994. It was allowed to feed and go in peace, its length estimated at 14 feet 7 inches.6

Clearly, then, the globster reported from New River Inlet may have been a decomposed basking shark, but Dr. Holder's vague reference to its "considerable length" leaves us to ponder what he meant—and whether the carcass surpassed the known maximum size for Cetorhinus maximus.

There is a further complication in that the same Florida carcass is separately listed by Heuvelmans as an occurance in August,1896 in his table of Strandings and captures (p 586) but in the text credited as being retold in the Shipping Gazette of 1886 (p. 140). The story is attributed to the captain of the ship Crescent City and the location as Carabelle, Florida. 1896 is a typo and Carabelle, Florida is on the New River Inlet. Those two things together make it much more likely that this is indeed the same carcass-but all in all, a less trustwothy story being told about it.