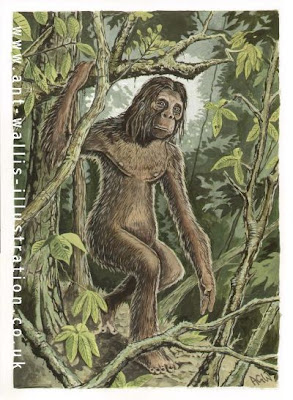 Sumatra, and the Orang-Pendek in particular, hold a special affection for me. Since I first visited this beautiful country, with its dense virgin rainforest and proud tribal people, I have always been fascinated by the orang-pendek, the `short man` of the forests. I have no doubt the orang-pendek exists. Over the years I have interviewed many witnesses who have seen this creature.

In 2009 the CFZ expedition was fortunate to have an eyewitness ourselves in Dave Archer, and Sahar Didmus saw one pinned against a tree, before it scurried away from us into the jungle. The experience so moved Sahar that he burst into tears! Importantly, there has been a considerable body of scientific evidence that has been gathered to support the existence of the orang-pendek. For example, previous expeditions I have led in 2001 and 2004 brought back both prints and hair samples.

Thus, because of the body of evidence gathered, the discussion has moved away from whether the orang-pendek exists, to what it actually is. This is what the Sumatra expedition this year seeks to achieve: a further refining of that process, hopefully with greater determinative evidence so that we can pin down the creature once and for all!! The team, as it stands, will comprise the following members: Dr Chris Clark, Richard Freeman, Dave Archer, Jon McGowan, Lisa Dowley, Andrew Sanderson, and Rebecca and Mike from CFZ Australia. I will again be leading the overall expedition team.

However, with a bigger group we will have the luxury of covering a wider area so the plan is, at present, to cover two locations. I will take one team to the Lake at Gunung Tujuh, whilst the other team, which will concentrate on the edges of the farmlands and villages, will be led by Dr Chris Clark.

Chris's team in particular will focus on the areas where there has been a concentration of orang-pendek activity in recent years. That way we get to maximise our chances, of both gathering evidence, and actually seeing it! We are aware it is always a long shot with these expeditions. More often than not, nothing is found, but our previous success must offer some encouragement. Please wish us luck in our endeavours.

This will be the sixth time that I have been to Sumatra, looking for evidence of the orang-pendek. In that time, I have been struck by the continuing pace of logging and the general deforestation, despite the efforts of the guides and rangers who accompany us. Leaving it alone just isn't an option - be in no doubt that time is running out for the orang-pendek and the area it inhabits. Our work may; just may encourage the habitat to be preserved. That has to be our ultimate objective. We hope to do some good as we continue our work. So, its once more off into the jungle with stout hearts and loose bowels!

More than one kind. One more nearly hominid and the other more nearly pongid, unless you also want to include the large siamang that is sometimes reported.

It will be useful to know if you have evidence of one or the other and it is a new species. But you will not have the solution to the mystery until you have nailed down BOTH.

Get some waterproof cases for the damn cameras this time, yeah?

Hi Dale, thank you for this.I think the first thing to say is how happy I am that we are going back, and with such a dedicated and experienced team!
I think we have had some debate on the CFZ website before,with divergent views well argued.I am pleaed that you wish us well.

Really looking forward to it! :-)