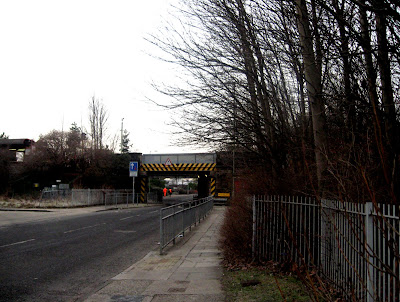 Firstly, I'd like to offer my profuse apologies for the hiatus between this blog and my last one, which has been caused by both my ill health and Jackie's. I've had a couple of nasty falls due to my narcolepsy, and they took the wind out of my sails a bit. Still, I'm feeling a bit better now and determined that any future falls will be strictly alcohol-induced ones.

Some time ago, a correspondent who reads one of my newspaper columns sent me an extraordinary story, which was duly published. This prompted an e-mail from another correspondent who told me yet another bizarre tale even stranger than the first, the substance of which will take up the rest of this blog.

First, though, some background information. South Tyneside is the smallest Metropolitan Borough in the UK (some say the second smallest, but we won't quibble), and unusually for such a small place, claims no less than three anthropomorphic cryptids, all of which I've dealt with in this blog over the last year or two. There's the Cleadon Critter – a Bigfoot-type hairy hominid – the Splitback Demon (an odd “lizard man”) and a hairless, blue-skinned, blue-eyed weirdo called, well, Blue Eyes.

Now South Tyneside also plays host to the finest local train system in the land, colloquially called “the Metro.” The carriages are always immaculately clean, the trains always run on time and the staff are incredibly helpful. I don't know what we'd do without it. The Tyneside Metro system serves the populace on both the north and south sides of the River Tyne and is peppered with dozens of local stations. One of these, Bede Metro Station, can be found at Jarrow in the heart of an industrial estate. It is here where, allegedly, a fourth anthropomorphic cryptid has been seen on several occasions.

With the help of the afore-mentioned correspondent, I managed to track down one of the witnesses, who said that he had no problem telling me his story as long as he wasn't mentioned by name. Some years ago, he happened to be driving through the Bede Industrial Estate near Bede Metro Station with a colleague when, to their surprise, they saw a man standing in the middle of the road. He was wearing a long, black coat with a hood. They slowed to a halt as the chap approached their vehicle and without warning, banged on the bodywork with the flat of his hand. He also shouted something, the details of which I cannot recount here as to do so would just possibly allow readers to identify the witness. Suffice to say that it was not relevant to the substance of the story and under other circumstances would certainly not have led the witnesses to think they were being addressed by anything other than a bona fide member of the human race. Because the man had thumped the vehicle with his hand and shouted, though, I asked the witness if the chap had seemed angry. He said,”No, not angry exactly...just odd, you know...weird”.

Up to this juncture, the witnesses were both under the impression that the man was simply an “odd-ball” or an eccentric. Nevertheless, his behaviour, whilst not overtly aggressive, was bizarre to say the least and prompted the chap who was driving to put his vehicle in reverse and pull backwards to place as much distance between their vehicle and the stranger as possible. It was then that both witnesses noticed something truly extraordinary. Although from the waist up the stranger looked reasonably conventional, from the waist downwards he was anything but. He had two legs, but they were not human legs; they were actually those of a horse. Naturally, this changed the perspective of the witnesses radically. They realised that they were not dealing with someone who was nothing more than mentally unstable, but with something that wasn't fully human. They drove away from the scene as fast as they could, and both were deeply traumatised by the incident. “Even now, when I think about it, I get the shivers,” the witness I spoke to told me. “I haven't a clue what it was, but I know for certain what we saw; a man with the legs of a horse”.

I was later to learn that the two witnesses were not the only ones to have a run-in with the Bede Horse-Man. A relative of the afore-mentioned correspondent told her of another encounter. Seemingly, a number of workers at one of the units on the Bede Industrial Estate were going about their business when a man entered the premises, stopped and stared at them. They in turn looked at him, and were astonished to see that his feet were not those of a human, but actually hooves like those of a horse. He promptly turned around and left the building. The workers followed him outside, only to find that he had disappeared.

As both incidents took place in extremely close proximity to each other, I found it hard to imagine that they weren't connected in some way. However, I made a number of calls to colleagues and other regular correspondents and asked them if they'd heard of these two encounters. No one had, but one associate told me that he was actually aware of a third incident, which, to my mind, reduces the possibility of coincidence to zero.

At approximately 11 pm on New Year's Eve 2007, two young men were making their way to a party. Their route took them past Bede Metro Station. As they walked down Monksway, they saw a man standing at the junction of the road and a small drive that leads to an industrial unit. As they drew close to him they noticed that his feet were actually hooves. At this juncture they both bolted under a nearby underpass and ran for at least a mile without stopping. Both of the men admitted to having been drinking – it was New Year's Eve, remember – but vigorously denied that they were drunk.

There are a number of things about this whole affair that trouble me. The first is that, despite having written up South Tyneside's Forteana for decades, I had never heard of these extraordinary stories before. I found it hard to imagine that every one of these encounters had so far managed to fly below my radar, so to speak. However, having talked to the first witness I have to say that I am convinced of his sincerity and truthfulness. Perhaps the events are just so bizarre that the witnesses refrained from discussing them with others out of the fear of being ridiculed.

Regarding the latter encounter, I also found it strange that the two teenagers were walking through an industrial estate at night, allegedly on their way to a party. Its not difficult to get a taxi in South Tyneside, even on New Year's Eve. Nevertheless, there could be any number of explanations for this. I also wondered why the correspondent who told me this tale hadn't thought to mention it to me before, knowing how fascinated I am by this sort of event. These are questions for which I have no answers, but in the final analysis we are left with this: several witnesses on no less than three separate occasions have apparently seen a man with the legs of a horse in the vicinity of Jarrow's Bede Metro Station.

Working on the presumption that these encounters really did take place, the next logical question has to be, what on earth did they see? My guess is that the creature was some sort of elemental entity. I have noticed that events of this kind tend to be more common at locations with a strong spiritual history attached to them. Only a stone's throw away from Bede Metro Station are the remains of Bede's Monastery and the ancient St Paul's church. Adjacent to these is a park known as Charlie's Park – more correctly called Drewett's Park – which has a long history of hauntings and other ghostly phenomena.

One colleague suggested to me that the “half-man, half-horse” description could have Celtic connections. Perhaps he's right. I'm going to write up the story in one of my newspaper columns and ask if anyone else out there has encountered the Bede Horse-Man – or its kin. Any readers of this blog who can shed light on the matter should get in touch.
Posted by Jon Downes at 1:10 PM

It could also be a human with deformed feet. Some people do suffer from a congenital deformity which leaves them with just stumps for feet and I have seen photos while working at a Medical library: these stumps could look like horse's hooves to people that did not know better.

You have a cryptid there with blue eyes? I'd better keep away then, or I'll be taken to be one of those myself next.

Here in Ontario, Canada we are working a case which involves multiple sightings over decades of this same type creature. I'm not at liberty to disclose much, but I can tell you that although the area has no Celtic ties, it is indeed very spiritual. Thanks for posting this!

More so if you Google 'Bede + Horse' as this reveals various past and present connections between the name Bede and all things equestrian....coincidence?