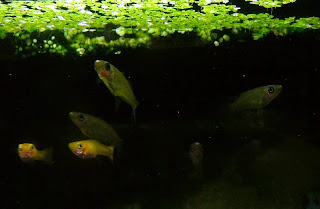 Back in June Max, Dave B-P and I went to the Livebearer auctions in Redditch, where, amongst other things, we bought some knife livebearers (Alfaro cultratus). We managed to breed them in October but sadly a power failure killed everything in their tank on my desktop, except for two male guppies and two large female cultratus.


Since then, one of the cultratus has disappeared, and I was beginning to despair until this morning when I noticed five tiny grey babies.


Calling to Oll to remove the two guppies immediately, we are feeding the babies with brine-shrimp eggs and are hoping that the one remaining adult cultratus doesn't decide to go in for infanticide. Oh, the dramas that take place on my desktop.

NB: Bizarrely, the missing cultratus turned up about half an hour after I wrote the above, and at time of writing there are still at least five tiny babies; the smallest livebearer fry that I have ever seen, since I was a child and bred Gambusia affinis in Hong Kong.
Posted by Jon Downes at 12:20 PM

Email ThisBlogThis!Share to TwitterShare to FacebookShare to Pinterest
Labels: fish