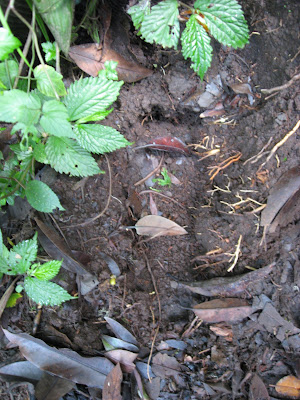 Gaurav Gupta wrote to us saying that he had taken some pictures of what may be orang-pendek tracks at Kerinci Seblat National Park on 18-March 2008. Hes was 5km from the nearest village and at an elevation of around 2500m above sea level. The tracks were far larger then any that Richard has seen, at around 12ins.
He continues:
"I apologize that the photo is not clear. I was just a traveler and did not pay much attention on the details of the footprints and didn't know anything about Sumatran Yeti that time. And it was really stupid of me not using any reference (e.g. my foot) or a measuring tape against the footprint.

You can access the rest of the pics of my trip at the following link.

http://picasaweb.google.com/gauravgupta.iitd/KerinciVolcanoTour
Posted by Jon Downes at 10:57 AM