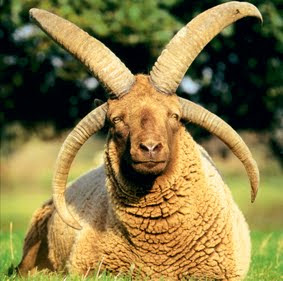 Looking like some distant relative of the Golden Fleece out of Jason and the Argonauts, this curious four-horned ruminant known as the Manx Loaghtan has wound its way from its ancient origins in Scotland, the Hebrides and Shetland Islands only to find itself with an ‘at risk’ designation and sheltered under the Protected Designation of Origin scheme owing to its appetising flesh, which has attained the gourmet status of a delicacy. With its population having dwindled to less than 1500 registered breeding females it can’t be that long before the only place you may be able to catch sight of one of these Isle of Man natives will be at your local zoo.

A cursory search of the web, though, turns up a few sites dedicated to the propagation and protection of the species, which should provide some hope th 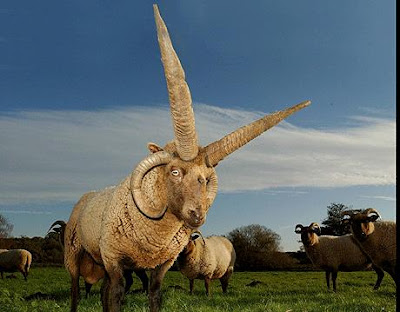 at its potential fate may yet be some way off.
Posted by Jon Downes at 10:17 AM

Otherwise I've seen such things at the petting zoo and they can come from more than one place. I believe there is a four-horned goat used in one of the Canary Islands location shots in Raquel Welch's One Million Years BC. The four-horned mutation can apparantly be independantly replicated.

"Lockton" is the correct pronunciation :)

It's pronounced Manx Lock-tun. And though they are rare, there is a very active Breeders' Group - see us on www.manxloaghtansheep.org

I don't know of any in the US or Autralia, but they are native to the Isle of Man (between England and Ireland)and there are quite a few flocks on mainland Britain as well. If you visit the Isle of Man, go to the National Folk Museaum at Cregneash.

Another good place to see them on the Isle of Man is the Grove Museum in Ramsey. The next field is usually full of them. (Cregneash sometimes only has a couple)

Actually springtime about May is a good time to come and see loughtan sheep as the lambs are very cute, very lively, chocolate brown and with little spiky horns when they get a bit older.

One more thing about them. Loughtans are much livelier and tougher than your standard white sheep. They are pretty rugged and intelligent, and hardier, and able to cope with the weather in the British Isles. They are native 'Iron Age 'sheep; like the hebridean ones, not like the white sheep which are middle eastern in origin I believe.
Also the meat is healthier, more like game.