Taxidermy has always been an important part of the arsenal of hoaxers; from the Feejee mermaid to Jackalopes, it was often used to offer unbelieving members of the public and scientists as proof of the existence of a strange animal. It also had the added bonus that whichever showman got his hands on it would have an attraction that they would not have to pay money to or feed. During the 19th century the amount of fake taxidermy knocking around led scientists to despair, so much so that when the first stuffed platypus made its way to Britain it was assumed to be a fake and torn apart by scientists looking for the joins.

Not all fake taxidermy was created to make money, however; some was created for stranger and more convoluted reasons. Such was the case of Charles Waterton's Nondescript.

Charles Waterton was perhaps the model for all eccentric English aristocrats and was well known in social circles for his peculiar deeds, actions and beliefs. These included sporting a crewcut when the fashion at the time was one for long hair, biting guests legs at the dinner table pretending to be a dog and climbing to the top of St Peter's in Rome to leave his gloves on top of the lightning conductor. The last deed supposedly caused the Pope himself to ask Waterton to climb back up and take his gloves down. Watert 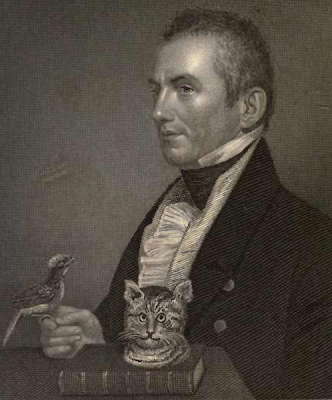 on's curious ways did not stop there; he believed in the medieval practice of blood-letting as a cure for illness, slept on the floor with a block of wood as a pillow for the rest of his life after the premature death of his wife (they had known each other for about a year when she died in childbirth) and would perform frequent 'flying experiments' by jumping off the roof of an outhouse on his estate.

Whatever the truth and motives behind Waterton's eccentric practices, he was actually quite an important naturalist. He invented bird nesting boxes and walled off 5 square kilometres (about 3 square miles) of his estate with a 9-foot wall in the 1820s to form the world's first wildfowl reserve.

Waterton was also one of the first people ever to warn about and raise objections to the problem of pollution when he successfully proved that chemicals from a nearby soap factory were killing his trees and polluting his lake, and he forced the factory to relocate.

He was also a brilliant taxidermist and one of his students later went on to teach Charles Darwin how to preserve specimens. His writing also attracted praise and his book Wanderings in South America, written about when he went to British Guiana to attend to his late uncle's estate there and the various explorations he had there, inspired many young men to take an interest in the natural world, including Alfred Russell Wallace and the afore-mentioned Charles Darwin.

For all his seriousness about his passion for the natural world, Waterton's eccentricities and peculiar sense of humour shine through even here. He would often create satirical taxidermy tableaux of events of the day, which became a source of great amusement. For example, his most famous work was a tableau of reptiles dressed in dapper clothes made to look like famous Englishmen of the day entitled 'The English Reformation Zoologically Demonstrated.' Another famous example of Waterton's humorous taxidermy was 'John Bull and the National Debt' which depicted a grotesque chimera of tortoise and porcupine with a human-like face being beset by small dragon-like lizards. Because of this sideline it was not a good idea to cross Waterton, as one customs man from Liverpool would find out....
Posted by Jon Downes at 11:23 AM