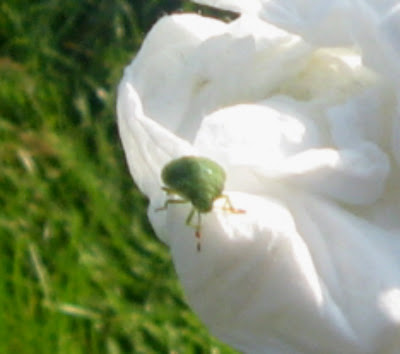 This year I suggested to Jackie that we camped at the Weird Weekend instead of staying at a B&B or a hotel. This shocked Mrs H as she knows that I am not the world's greatest outdoors person and that I am as keen on camping as I am on athlete's foot, which is not very much.

We booked up with the Dyke Green Camp Site in Clovelly, which is managed by a thoroughly nice chap called Mr Johns. We had a terrific time, except for the wasps. Jackie doesn't mind wasps but I can't stand the little buggers. Bees are different for like the German Stukas of WWII, they have a siren that warns you of their imminent approach. Wasps are different. They are silent but deadly, and serve no useful purpose other than to piss off this blogger. 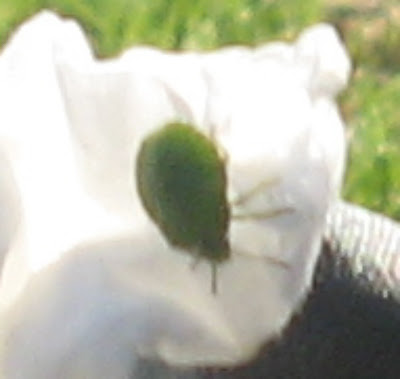 aperture at ground level and buzz around my head. Mrs H asked me why I didn't simply, "psychically tell them to go". I said I'd much rather physically twat them with a rolled-up newspaper.

But we also had another little visitor. On Monday morning, just before we set off for home, Jackie noticed what she at first thought was a grasshopper in our tent. On closer examination, however, we realised that it was nothing of the sort. It was, in fact, a ladybird-like beetle the likes of which we'd never seen in Geordieland. It was grass-green in colour and quite happy to walk about on your hand.

Our verdant interloper was quite cute, actually, but we haven't a clue what it is. I've attached two photographs, and I'd be interested to hear from readers regarding what it might have been….
Posted by Jon Downes at 10:36 AM

Me thinks it is a green shield bug (Palomena prasina) but the photo is not the best, so certain I am not. It is a shield bug - but it might be another species.

I agree; this is a bug, not a beetle (order Hemiptera, not order Coleoptera). As for wasps, the best way I have found to get rid of them is to locate their nest and thoroughly dose the entrance with the pesticide Derris Dust. This is an extract of the Quassia tree roots, the active ingredient being rotenone.

Now, the poison is fairly eco-friendly being a natural toxin and only having a fairly short half-life in the environment. This means that it can be used quite freely and will degrade to harmlessness in a few days, hence the usefulness for killing wasps (it is also highly toxic to wasps and will kill a nest overnight). The one thing to remember is that rotenone is very, VERY poisonous to fish so should never be used near ponds or watercourses of any sort. Oh, and if you don't have a problem with a wasp nest, leave it alone; they're useful predators of caterpillars and the like.