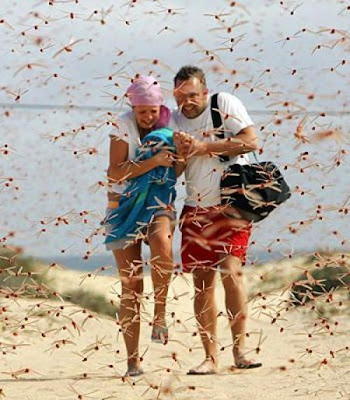 Regular readers of my bumblings will know several things about me, most notably that I was brought up in Hong Kong where I first got my love for the natural world. They also might know that I have been working with my childhood friend Richard Muirhead on a book about the mystery animals of Hong Kong in a desultory sort of way for many years now, and as part of my ongoing research for this project, which will eventually reach fruition (honest) I subscribe to an internet newsgroup called Old Hong Kong, which occasionally does what it says on the tin and sends me photographs of Hong Kong in the years between the wars, and the post-war years before it became the unbridled mouthpiece of lassaiz faire (and non-lassaiz faire) capitalism, and was still a bastion of colonial architecture, and – possibly even more important – colonial values.

In amongst all the unwanted, though mildly amusing rubbish, was one called [old_hongkong] When Insect Attack what Happen, which included this picture which to many people probably looks like a badly photoshopped excerpt from a third rate horror movie, but brought back vivid memories of some encounters from my childhood that I had completely forgotten.

Between the years of 1966 and 1970 I attended Peak School, which surprisingly still exists at Plunkett’s Road, The Peak, and on several occasions (my brain is trying to say that this happened every summer but this is, to be honest, just wishful thinking) there were enormous swarms of dragonflies, which terrorised children at the school. When I say swarms, I am talking of an obscene mass of insects, tens or even hundreds of thousands strong, which appeared to have forgotten the typical good-mannered hunting strategies common to the Odonata and flew willy-nilly into each other, into walls, and into the faces of the terrified children.

From memory, they were an orange/brown colour, which corresponds well with Pantala flavescens, which is, according to none other than James Tutt – one of the founding fathers of modern entomology (cited by Wikipedia) – the most widespread dragonfly on the planet. It is also (again, according toWikipedia) known in Hong Kong as the typhoon dragonfly as it arrives with or shortly before the seasonal rain.

A brief look at Google indicates that these swarms still take place. According to one couple writing on their religious-themed blog http://everydayadventuresinfaith.blogspot.com/2009/07/dance-of-dragonflies.html

they do indeed swarm just before the typhoon:

“he most fascinating signal of the approaching storm was the dance of the dragonflies. As the barometric pressure changed yesterday, the dragonflies came out in swarms. As a creature of the wind and water, in the Chinese culture the dragonfly symbolizes change. Its iridescent wings are incredibly sensitive to the slightest breeze, and so we are reminded by their "dance" to heed where the proverbial winds blow lest we run into stormy weather.”


“When they cried out to the LORD in their trouble,and he brought them out of their distress.
He stilled the storm to a whisper; the waves of the sea were hushed.
They were glad when it grew calm,and he guided them to their desired haven.”


Which is all very well, but I have to say that I don’t see the relevance.

If indeed the insects that I encountered as a child were Pantala flavescens then the fact that they migrate to the former British colony does solve one of the conundra that have been mildly bugging me for the last four and a half decades.

You see, the dragonflies weren’t the only species of tropical insect who – at least in the days when I lived in Hong Kong – were wont to swarm. Flying ants, termites, small beetles, aphids and various types of Lepidoptera swarmed fairly regularly. It was only the latter that were quite as spectacular as the dragonflies. I remember in 1970 when there was a magnificent glut of silkmoths – probably Cynthia moths Samia cynthia. Herklots, in his seminal work The Hong Kong Countryside (1951), notes on page 69 that three different species of the Danainae or monarch butterflies were also known to swarm in the winter months in Hong Kong. I recall also seeing a swarm several-thousand-strong of a yellow and black butterfly that forty-five years later I am completely unable to identify. However, the swarms of these other insects were all caused by mass emergences from the larval state. One used to see the adults in the process of emerging from their chrysalides, or – in the case of termites or flying ants – emerging in the tens of thousands from their communal homes.

Even as child I was aware that dragonflies emerged into adulthood after a protracted adolescence as aquatic nymphs. Indeed, I kept the nymphs of several species in my various makeshift aquaria on my bedroom windowsill and once or twice even managed to rear them to adulthood. I had always imagined that these obscene and completely daunting swarms of dragonflies terrorising the neighbourhood for more than a day had all emerged from their nymphal state at the same time. But how could they? There were very few ponds and streams on that part of Hong Kong island, and I was very familiar with the inhabitants of most of them. Sure, there were usually one or two dragonfly larvae to be seen but nothing even approaching the amount of biomass it would have taken to produce these immense swarms, which were like something from the imagination of Clark Ashton Smith.

I decided this afternoon, once the subject had come back into my head after a gap of (terrifyingly) nearly half a century, to look up the causes of dragonfly swarms. Google prodded me towards a blog called http://dragonflywoman.wordpress.com/.

She informed me that there are two known types of swarming behaviour:

Neither of these descriptions actually tick all the boxes. Although the characteristics of the swarms I encountered as a child were far more likely ‘static swarms’, and indeed they were usually congregated with their epicentre around a grassy area (either the playing field at Peak School or the grassy playground that apparently still exists at Mount Austin). These were in enormous numbers, and despite the fact that I (alone amongst my terrified compadres) found these swarms fascinating and did my best to observe and interact with the wallages of insects, I have no memory ever of seeing any of them hunting or eating their prey. I remember this with a fair degree of certainty because on other occasions I used to watch Anaciaeschna jaspidea, the common evening hawker, or the glorious Anax immaculifrons hunting and eating its prey and I was very aware of the hunting strategies of the Odonata.

I am only too aware of the fact that dragonfly woman is writing nearly half a century after my experiences, and that times have changed for invertebrates (as they have changed for all of us) in the intervening years. For example, I remember in 1971 catching, marking and releasing nearly 400 specimens of the two cabbage whites Pieris brassicae and P. rapae simply in one day within the confines of my garden here in North Devon and the garden of Well Cottage next door. These days one is lucky to see three or four in a day. So to the photograph sent to me in a parcel of soft pornography proving that my memory is not defective, what actually were these dragonfly swarms on Victory Peak, Hong Kong island, during the years when my contemporaries back in Blighty were experiencing the Swinging Sixties?

In Canada in 1979 I witnessed the beginning of the migration of monarch butterflies Danaus plexippus and the sheer biomass of hundreds of thousands of insects was an awesome sight that has stayed with me ever since. However, I wondered then as I wonder now, exactly where this huge number of butterflies had come from. I had been in my little suburb of Toronto all summer, and had seen the unmistakable caterpillars on milkweed plants quite commonly. But the caterpillars weren’t there in their millions. I wondered then whether certain areas, and indeed certain trees, were for some reason obvious to the orange and black patterned insects, but obscure to the amateur naturalist intent on grokking this entomological experience in its fullness – designated muster points from whence the horde of butterflies could, once whatever biological trigger was necessary, fly thousands of miles down to Mexico.

I wonder whether, rather than a large swarm of migrating insects having arrived in Hong Kong just before a typhoon, the opposite could have taken place. Perhaps individual specimens of Pantala flavescens from all over the former British colony, the former Portuguese colony of Macau and quite probably large chunks of Guangdong Province, had gathered together on Victoria Peak, using it as a sort of departure lounge before – with the typhoon as its impetus – beginning an enormous migration which could take them half way across Asia.