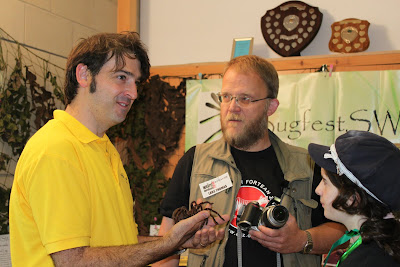 Readers - I, Harriet Wadham, roving reporter for the Weird Weekend, interviewed Lars Thomas the hair analysist (and more besides that), to bring you vital pieces of information…
Name: Lars Thomas
Connection with the Weird Weekend: He met Jon in London 15 years ago. They were good friends and as a result, around 6 or 7 years ago he got a letter asking if he would talk at the third Weird Weekend.
Why he began doing things for the CFZ: Lars is a zoologist and Jon wanted him to identify the hair samples. Lars also has fun around CFZ personnel.
Favourite cryptozoological author: Karl Shuker as he finds new stories all the time and travels to find subjects and sightings.
When his interest began: Lars was given money to buy some books at the book stall and a book about the Loch Ness Monster particularly caught his eye. After reading this he began to buy more cryptozoological books.
Most fascinating place his interest has taken him: Belize- scattered with Mayan ruins and spread with rainforests. Folklore was also based around the jungle.