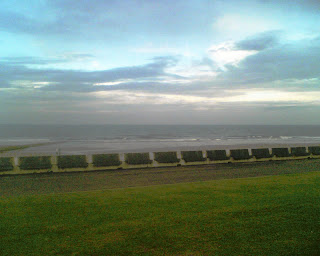 It seems that I owe Mike Hallowell an apology. I have been sitting on this article for so long that I lost it and only found it by chance this morning...

Recently I penned a newspaper column regarding South Tyneside's very own sea monster, the Shony. I've accumulated a number of credible sightings of this beast stretching over a considerable period of time, and as most readers know, Jackie and I think we may very well have seen it ourselves during a visit to the coast.

The following account was written up in my book Mystery Animals of the British Isles: Northumberland & Tyneside (CFZ Press. 2008). The details of which were supplied to me by my friend Malcolm Urquhart. However, further information was given to me recently by my old friend, the author Alan Tedder, one of the north east's most knowledgeable researchers regarding myths and folklore. 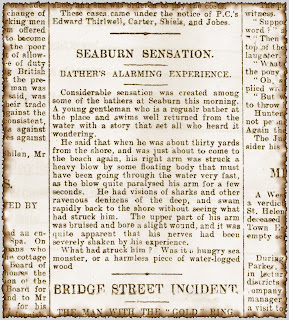 ng man happened to be taking a morning dip at Seaburn when he had an alarming experience. The account found its way into The Sunderland Echo that very evening:

"Considerable sensation was created among some of the bathers at Seaburn this morning. A young gentleman who is a regular bather at the place and swims well returned from the water with a story that set all who heard it wondering".

In fact, the encounter caused a media sensation. By mid-afternoon thousands of locals had gathered along the shore to see if they could catch sight of the Shony. They were to be disappointed. What actually happened to precipitate such a reaction was this:

About thirty yards or so from the shore, the bather had decided he'd had enough for one day and planned to head for the beach. Ironically, if he'd made that decision just seconds earlier or later, he might have remained eternally oblivious to what was lurking in the water alongside him.

Suddenly the bather felt a heavy blow against his right arm. This wasn't a gentle tap; it actually paralysed his arm for several seconds, rendering it useless. Alarmed, and despite the fact that his arm was worse than useless due to the blow it was struck, he managed to strike out for the shore. Later he would tell reporters that his mind had conjured up, "visions of sharks and other ravenous denizens of the deep".

With some difficulty he eventually reached the beach. The chap later admitted that he was so "terrored" by the encounter that he found himself unable to look behind him to see what he had actually been attacked by. Several bystanders, seeing that the man was in some distress, went to his aid. He told them what had happened, and on examining his arm they found it to be badly bruised and bleeding from a laceration. As The Sunderland Echo reported, "it was quite apparent that his nerves had been severely shaken by his experience".

Suggestions were put forward later as to just what the bather might have encountered. Some suggested that he had merely collided with, "a piece of water-logged wood". It's not impossible, of course, but the man himself certainly didn't seem to think along those lines. He was convinced that he'd encountered a large, living creature.

When questioned later the bather claimed that whatever had hit him had been, "travelling very fast".

Seaburn is, of course, merely a hop, skip and jump away from Marsden Bay, the alleged home of the Shony. Did the bather have a close encounter with this legendary sea monster? He wouldn't be the first – or the last. Sightings of the Shony have been reported at Blackhall Rocks in Cleveland, Seaburn, Whitburn, Marsden Bay, Tynemouth and further up the coast in Northumberland.

I intend to do another blog very shortly on a few other snippets of information that have come my way regarding the Seaburn encounter which give us a little more insight into the affair. I'm also planning to compile a database of sightings, so I'd really appreciate it if readers could send me details of any sea monster-type encounters they know of that have occurred in the North Sea, particularly those near the north east of England or Scotland. Detailed accounts are particularly welcome, of course, but even small, anecdotal recollections and second-hand stories will be greeted with enthusiasm.

When a website devoted to the Shony is launched (I'm working on it feverishly) all correspondents will be added to a Wall of Fame (or whatever) for their contribution.
Posted by Jon Downes at 12:13 PM

Sounds like the bather was struck by a hit-and-run shark-which struck him but did not bite. That does happen sometimes.